SINGAPORE - Technology like artificial intelligence (AI) should not be used for the sake of it but rather in tandem with creative and innovative thinking when solving problems.

This was the message of Mr Li Hongyi, deputy director for data science and AI at the Government Technology Agency (GovTech), during a sharing session on the future needs of a digital economy and Smart Nation.

Mr Li, the 31-year-old son of Prime Minister Lee Hsien Loong, said: "A lot of technological innovation is not so much about using high technology for the sake of saying you can use AI or not.

"In the end, technology is just a tool and what you're trying to do is figure out the easiest way you can get around (the problems)."

Mr Li was speaking at a conference on Industry 4.0 and getting small and medium enterprises (SMEs) ready for the needs of a digital economy and Smart Nation. It was organised by the Employment and Employability Institute (e2i) and Human Capital Singapore, an education and training centre for human resources here.

Mr Li is part of the team that created the Parking.sg app, which allows motorists to pay for parking electronically and forms part of Singapore's Smart Nation drive.

He spoke about his experience developing the app, which he said started from an observation that people were using too many "annoying" parking coupons, which often led to people rushing appointments so they did not overrun the time they had paid for. 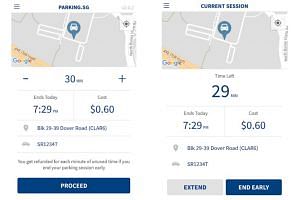 His team took time developing the app, testing it in just one carpark and allowing developers to identify and solve problems.

Mr Li warned of the dangers of trying to do too much at the start, and advised app developers to start small as projects have a higher tendency to "die" if they get too big too quickly.

"I've seen lots of really, really big apps and big companies who are doing terrible jobs and are unable to improve themselves, but that's never been the problem of somebody doing something small," he said.

"You can add on more complexities later, you can go bigger later. But you need to do something well first."

Dr Koh, who is Senior Minister of State for Trade and Industry, advised SMEs not to be "distracted" by government grants for digitisation efforts but rather set out their objectives for going digital first.

He said: "You don't go to see a doctor and ask 'What medicine can you give me', right? The doctor will ask you: 'Where is the pain?' first."

The chief cloud architect of Alibaba International, Dr Derek Wang, also gave a talk on Alibaba's experience in helping SMEs to expand their businesses to China.