SINGAPORE - On the first day the new Parking.sg app kicked in, some motorists The Straits Times spoke to gave it the thumbs up as it negates the need to tear parking coupons at public carparks without electronic gantries.

It was a cinch to download, said three who have done so on their smartphones. The scheme starts today (Oct 1).

But most have yet to try it out, with seven out of 10 interviewed saying that they would do so only when more use it.

Some prefer to finish their coupons first, while others - mostly the elderly - said they would use the app only when coupons are phased out altogether. The government agencies have not said when this will happen.

One motorist, Mr Eugene Tay, 27, a director of a trading firm, was interviewed at a carpark at Upper Boon Keng Road. He said that operating the app was easy as he needed to key in payment and vehicle details just once. He also found the user interface easy to navigate.

But he said his elderly parents who do not even have smartphones would still have to rely on coupons.

The new Parking.sg app, developed by government agency GovTech, can be used at some 1,100 carparks.

Between 1,000 and 5,000 Android phone users have downloaded the app from the Google Play store. The Apple store does not publicly track the number of downloads.

The app, first announced by Prime Minister Lee Hsien Loong at this year's National Day Rally as part of Singapore's Smart Nation drive, will eventually see the humble parking coupon being phased out.

Motorists told ST that the app offers many advantages over parking coupons, which were first used in the 1980s.

Of 10 motorists interviewed, only one had downloaded the app while two others did so on the spot.

Accountant Vanessa Tan, 40, downloaded the app in the morning after reading a news report on its launch but has not started using it as there is generally free parking on Sundays. She said the app saves drivers the hassle of buying parking coupon booklets.

Ms Tan said: "It saves the time needed to tear out the coupons as I can simply key my parking duration into the phone and hit the start button when I'm already out of the car."

With the app, drivers also need not worry about filling in the wrong parking duration in the coupon and rushing back to the car to "tear" out another one, said 39-year-old insurance agent Sasi Kumar.

The app will also alert motorists when their parking sessions are about to expire and give them the choice to extend their sessions remotely. 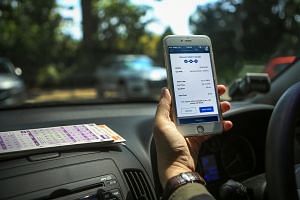 Mr Kumar said: "As an insurance agent who uses the car a lot for work, sometimes it is hard to know exactly how long I need to meet clients for and I would constantly worry about incurring a fine."

Retiree Anthony Chia, 72, said: "Electronic gantries are more convenient, but the app is a big improvement over the coupon."

His concern is whether the app is accessible to elderly Singaporean motorists, some of whom may not have smartphones.

Mr Chia added: "I have a smartphone myself because I know it is something that older people must be able to pick up on, but it can still be difficult for some others to download the (Parking.sg) app, register their car and credit card details and start using it."

Banking executive Louis Liew, 35, said: "For the older generation still not savvy with smartphones, parking coupons should still remain for the time being as they will still need some time to pick up (on using this app)."

For now, the Parking.sg app can be used only for cars and light goods vehicles.

The scheme will be extended to motorcycles and heavy vehicles by the end of the year.

Additional signage has been put up at carparks that will reflect the carpark's code.

These codes, which motorists need to select in their Parking.sg app, are generally found only on signboards placed at the main entrance of carparks.

App users can also search for the codes within the app by using the phone's GPS location.