Hundreds turn up to say final goodbye to 28-year-old, including celebrities and fans

Corporal First Class (NS) Aloysius Pang, an actor who died after suffering injuries during NSman training last week received an emotional final send-off yesterday - with the hundreds who turned up reflecting the way the 28-year-old's story had captured the hearts and minds of a nation.

Though a large crowd had gathered at Mandai Crematorium yesterday afternoon, as the white hearse carrying the body of Mr Pang turned into the driveway, there was pin-drop silence.

The quiet was broken only when the procession began and the military band marched and played a tune in front of the hearse.

Behind the vehicle, Mr Pang's elder brother Kenny, looking solemn and wiping tears from his face, followed closely on foot. The rest of the family, along with close friends - most of them grim-faced and teary-eyed - were waiting in the hall for the private funeral service.

About 300 Singapore Armed Forces (SAF) servicemen from the Artillery Formation flanked the stretch leading to the service hall and saluted their late comrade.

Outside the service hall, eight pall bearers stood in formation. They carried the casket, draped with the state flag, into the hall past the crowd of onlookers and media.

When the service was over, the deafening sound of gunshots was heard as six servicemen fired three rounds of blanks. They then bowed their heads and observed a minute of silence.

When the service was over, the deafening sound of gunshots was heard as six servicemen fired three rounds of blanks. They then bowed their heads and observed a minute of silence.

Although members of the public had been asked not to attend the funeral service at Mandai, some like teacher Ken Tan, 48, felt compelled to turn up.

"He died in training, he has been a good son for Singapore," said Mr Tan, who had waited outside the hall.

"I don't know him personally, but I feel the loss of a Singaporean who had worked hard for his future."

After the cremation, Mr Pang's parents left the premises. His mother then emerged, held up by family members as she was sobbing so hard she could barely stand.

Trailing behind them was Mr Pang's girlfriend, actress Jayley Woo, along with a host of his show-business colleagues, including television host Quan Yi Fong, actor Shane Pow and actress-radio deejay Kimberly Wang. Many were seen trying to compose themselves even after the final farewell.

A three-day wake, which began on Friday, and a public memorial service yesterday were held at 82A MacPherson Lane. A part of the wake on the second and third day was open to the public.

Those who had turned up included Minister for National Development Lawrence Wong, MacPherson MP Tin Pei Ling, and Marsiling-Yew Tee GRC MP Alex Yam, as well as many of Mr Pang's fans and fellow celebrities. Representatives from the Singapore Armed Forces were also present, including Colonel Terry Tan, commander of the Combat Service Support Command.

Shortly after the memorial service at MacPherson began, a young fan collapsed from the heat and was taken to the side to rest. 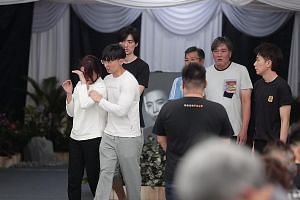 During the service, colleagues, friends and relatives delivered more than 10 eulogies.

Actor Xu Bin, a good friend of Mr Pang, said: "You were always there for me, no questions asked." Even as he teared up, he also shared examples of Mr Pang's selfless ways, such as how he would take the time to donate blood and even thought of donating his bone marrow.

Speaking before the memorial service, musician Narelle Kheng from home-grown English pop band The Sam Willows, said it was hard to believe that Mr Pang was gone.

"He was a passionate actor. An angel. If anything, he wasn't one that deserved (to die in such a way)."

Many attendees were unable to hold back their emotions as they approached the coffin, with some bearing flowers and gifts for the late actor.

Driver Vincent Kan and his girlfriend were among the first few who had turned up for the wake yesterday morning.

The 25-year-old had been a fan of Mr Pang since a few years ago when he was cast as an extra in a drama that the late actor had starred in.

"I remember his acting skills and how he persevered despite the heat and the need for multiple retakes," he said.

Madam Leanette Teo, who is in her 60s, had watched the actor "grow up on television".

"I thought I should come and pay my respects," said Madam Teo, who works in logistics.

Mr Pang was carrying out repair works inside a Singapore Self-Propelled Howitzer on Jan 19 and suffered serious injuries to his chest and abdomen when the gun barrel was lowered, the Ministry of Defence (Mindef) said earlier.

He was evacuated to Waikato Hospital, a regional trauma centre south of Auckland, where his condition deteriorated, despite undergoing three operations. His body was flown to Paya Lebar Air Base on a Republic of Singapore Air Force KC-135R tanker aircraft on Friday.

His death was the fifth reported since September 2017, following four years of zero training-and operations-related fatalities. Mindef had said that an independent Committee of Inquiry will look into the circumstances leading to Mr Pang's death.

Polytechnic student Gloria Lim, 21, who was a fan of Mr Pang, said: "I hope he reincarnates and can do what he set out to do in his next life. It's sad that his life was cut short."

Hundreds turn out to bid farewell to Aloysius Pang

Hundreds of friends and fans of actor Aloysius Pang lined MacPherson Lane yesterday afternoon for the final send-off of the 28-year-old, who died after suffering injuries while on NSman duty in New Zealand. Corporal First Class (NS) Pang was accorded the full honours of a military funeral.