SINGAPORE - A video series featuring interviews with the Istana's long-serving staff was launched on Friday (May 3) by President Halimah Yacob during a visit to the revamped newsroom of The Straits Times.

The series, titled Faces Of The Istana, is part of a multimedia project by The Straits Times that will take readers on an interactive tour of the sprawling grounds of the Istana, which marks its 150th anniversary this year.

Through augmented reality, videos and 360-degree photos that will be launched on a microsite later this year, viewers will get to learn about the history and heritage of the presidential residence, its neo-Palladian architecture, as well as its gardens and iconic spots.

"We hope readers can explore and experience for themselves the beautiful grounds of the Istana, even if they have not had the chance to visit it during the open house," said ST digital editor Ong Hwee Hwee, who oversees the project.

The first of three videos in the series features the Istana's chief butler, Mr Francis Ho. The other two parts will be released later this year.

In the 21 years he has worked at the Istana, Mr Ho, 57, has served many world leaders. 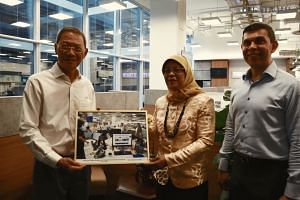 But his most memorable experience was meeting Britain's Queen Elizabeth II, who visited Singapore's then President S R Nathan at the Istana in 2006. "It was a great honour to have met the Queen in person. As a butler, it was indeed a proud moment to have the opportunity to serve the Queen," Mr Ho recalled, remembering accompanying the Queen and her husband Prince Philip as they toured the rooms.

As the Istana's chief butler, he is in charge of the service staff of the presidential residence. His team plans days in advance for the open house - usually five days a year when people can enter the Istana grounds.

Such events, like the one on Wednesday celebrating Labour Day, require elaborate preparation, including making sure decorations are laid out, and the rooms are set up properly for public viewing.

Built in 1869 as Government House, the Istana served as the residence of 21 governors during the colonial period before independence.

Mr Ho, who has served under four of Singapore's presidents, starting with the late Mr Ong Teng Cheong in 1998, noted that the Istana has constantly refreshed itself through the years. But even with the changes from president to president, some things never change.

He said: "What has remained the same would be our dedication to do the best in our duties."