SINGAPORE - Digital technology has fundamentally changed the way people consume news today, said President Halimah Yacob on Friday (May 3) after paying a visit to the revamped newsroom of The Straits Times.

Madam Halimah said: "I am glad that ST is keeping pace with this transformation by using data analytics to anticipate consumption patterns and trends, as well as organising the newsroom to better facilitate collaborations among its journalists."

During a tour of the facilities led by ST editor Warren Fernandez, Madam Halimah was shown how ST makes use of data analytics to keep track of topics that keep readers' interests, test how effective different headlines are at catching readers' attention and to keep journalists informed about how well their articles are doing.

She also interacted with ST's editors, journalists and other staff at the newsroom's central hub, which was redesigned to allow journalists and editors from different desks to work more seamlessly across various media platforms.

Mr Fernandez, who is also editor-in-chief of the English/Malay/Tamil Media (EMTM) Group of Singapore Press Holdings (SPH), said: "We were very happy to share with President Halimah how we have been working to transform our ST newsroom into a multimedia operation.

"She has seen the results in the videos our team worked on in collaboration with the Istana to mark its 150th anniversary.

"So this was a good opportunity for her to meet the team behind this effort, and also to get a sense of what goes into producing such multimedia content."

ST returned to its newsroom in January after a year-long renovation project was completed.

It was the first complete renovation since ST moved into its current News Centre premises in Toa Payoh North in February 2002.

Madam Halimah was shown a number of ST's virtual reality and augmented reality projects, including a preview of one that is still in the works.

At the newsroom's recently completed video production studio, she saw a 360-degree photo of the Istana's banquet hall where state banquets are held. 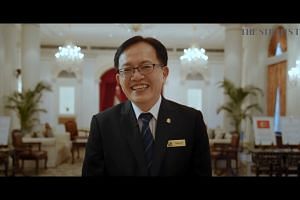 The banquet hall will be one of the stops on a virtual tour of the function rooms on the first floor of the Istana's main building that will be launched by ST later this year.

Madam Halimah also announced a video series on Friday titled Faces Of The Istana, which features interviews with its long-serving staff.

The video series and virtual tour are part of a multimedia project by ST in collaboration with the Istana to mark the latter's 150th anniversary.

Madam Halimah said: "As a national monument, the Istana is a source of national pride and identity for Singaporeans.

"I hope that the multimedia content will give everyone a glimpse of the people and the grounds of the Istana."