SINGAPORE - After going through her own struggles, Ms Angie Chew, 56, channelled her efforts towards helping many others by setting up centres that provide emotional and mental support.

For her contributions to society in helping those with mental health issues, as well as the elderly, Ms Chew was named The Straits Times Singaporean of the Year 2019 on Tuesday evening (Feb 11) at the Istana.

She said receiving the award was “a real win for mental health” as it is an under-recognised area that is under-invested, with more resources devoted to physical ailments than mental health problems.

She added: “I hope that this will also inspire more people to talk about their mental illness and also give support to people who have mental illness, because it’s not an easy journey (and is) often misunderstood.”

Ms Chew started Brahm Centre in 2012 to provide free health education, as well as other services such as befriending, counselling and dementia screenings for seniors who are frail and lonely. There are now three centres, with a fourth to open later this year.

Ms Chew, a former computer professional, also conducts mindfulness courses for companies as well as a graded module on the subject for undergraduates at the National University of Singapore. Her fees are donated to Brahm Centre.

Last year, in response to increased rates of depression and suicide among the young, Brahm Centre launched AssistLine, a hotline to offer support to students and parents in distress.

Angie Chew: Lighting a candle for those with mental health woes

Ms Chew said her own struggles in life gave her the strength to help others. She cared for her mother with dementia, endured years of emotional bullying at work and grappled with depression.

She turned to mindfulness - the practice of paying attention to the present moment in a non-judgmental way - in a bid to refocus her life.

Realising there was a gap in support for those who were struggling emotionally or mentally, she decided to "light a candle" for others who were going through similar dark times.

Singaporean of the Year 2019 | THE BIG STORY | The Straits Times

Ms Chew received a trophy and a $20,000 cash prize from President Halimah Yacob on Tuesday.

She said that with the current circumstances, it is a time to be mentally resilient and resolute, which links back to being mentally healthy.

Amid the coronavirus outbreak, she has started a one-hour mindfulness session for viewers to destress on the Brahm Centre Facebook page from 12.30pm to 1.30pm on weekdays.

“As a nation, let’s not just be wealthy, but be happy,” said Ms Chew.

There were 11 finalists in the running for the award this year, and the other 10 finalists received $5,000 each.

In her speech, Madam Halimah said all the finalists were deserving for their efforts and contributions in the various areas they serve.

She said: "Among the 11 finalists, some are everyday regular Singaporeans who performed an extraordinary act, while others have built up a body of work, whether it is offering mental health support, feeding the homeless, or improving eldercare with technology.

"Some of this year's nominees have made great strides to alleviate issues that have become more prominent over the years, such as mental health, sustainability and the emphasis on grades and examinations."

The cash prizes were sponsored by UBS Singapore.

Ms Chew also received a five-night stay in any of the global properties owned and managed by Millennium Hotels and Resorts. The other finalists will each enjoy a three-night stay.

Osim also presented Ms Chew with a uDiva Star Massage Sofa and uJolly Back Massagers to the others.

The final decision was made by a judging panel of 14 who were guided by online voting by members of the public.

The 2018 award was given to Ms Siti Noor Mastura, who co-founded non-profit organisation Interfaith Youth Circle, which promotes a better understanding of the role that faith groups can play in an increasingly complex and divided world.

Previous recipients of the award, which began in 2015, include Dr Goh Wei Leong and Healthserve, an organisation that provides migrant workers with affordable healthcare; Olympic gold medallist Joseph Schooling and his parents May and Colin; and Madam Noriza A. Mansor, who won hearts when she helped an elderly man who had soiled himself in public. 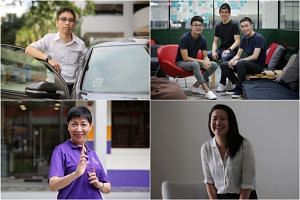 ST Singaporean of the Year: Meet the finalists

The Straits Times Singaporean of the Year 2019: More inspiring stories

Madam Noriza, 55, said of Ms Chew: “Addressing mental health challenges is not easy. It takes a lot of patience and passion. Ms Angie Chew is a very inspiring figure to many people. She has done a great job with the opening of Brahm Centres across Singapore.”

Mr Edmund Koh, president of UBS Asia-Pacific, noted that all finalists had in common "wide and open hearts to care for all in the community, friends and strangers alike".

"This quality is all the more important in today's context as Singaporeans stand united and help one another in battling the recent coronavirus outbreak," he said.

Mr Koh added: "This year, we would like to congratulate Angie Chew for her positive and selfless perspective, motivating many others in their own journeys. Our finalists continue to do us proud with their extraordinary strength of character, acts of bravery and kindness. We congratulate all the finalists as they are each deserving in their own way."

Mr Warren Fernandez, editor-in-chief of Singapore Press Holdings' English/Malay/Tamil Media Group and editor of The Straits Times, said: "Mental health and well-being, not least among our young, is a growing issue of concern, in Singapore as well as around the world.

"As the world grows more complex and seems to move ever faster, everyone could do with some help in slowing things down and finding a little peace and quiet in our minds and lives.

"The Brahm Centre, founded by Angie Chew, has been a source of help and comfort for many grappling with this in our society. For her leadership, kindness and inspiration to others, she is a worthy winner of the Straits Times Singaporean of the Year award."