SINGAPORE - Saleswoman Noriza A. Mansor has been named the first Straits Times Singaporean of the Year.

Madam Noriza, 50, beat nine other contenders to the title, which seeks to recognise Singaporeans whose extraordinary acts of goodwill, ingenuity or perseverance improved their community and the lives of others in 2015.

ST Singaporean of the Year: The winner is announced

Her win was decided after a public vote and deliberation by a 15-judge panel.

Prime Minister Lee Hsien Loong presented the Singaporean of the Year trophy and a $20,000 cash prize to Madam Noriza during a ceremony at the UBS Business University on Tuesday (Feb 2).

The single mother of five attended the ceremony with three of her children, as well as her future daughter-in-law. 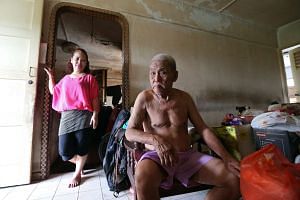 ST Singaporean of the Year: Bittersweet win for Noriza A. Mansor who discovers elderly she helped has been hospitalised 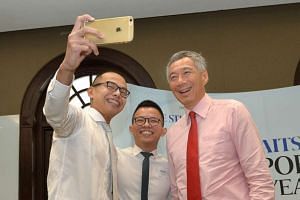 ST Singaporean of the Year finalists share stories, draw inspiration from one another

Madam Noriza, who works as a bedsheet promoter, made headlines in October 2014 when she stepped forward to help an elderly man who had soiled himself while buying groceries with his wheelchair-bound wife at a Toa Payoh supermarket.

Others had recoiled from the man and his stench, but Madam Noriza's subsequent acts - she knelt down to wipe the dried faeces 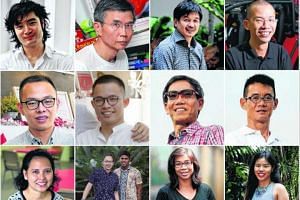 Meet the 10 nominated for ST Singaporean of the Year 2015

off his legs and bought him new shorts - moved a bystander to tears.

She did not stop there, however. Since that day, she has regularly used her days off to visit Mr Tan Soy Yong and his wife Lee Bee Yian, both 76, even after they were moved into nursing homes.

Orphaned when she was 21, she said she considers the elderly couple to be like her adopted parents.

Madam Noriza said of her win: "I'm speechless. I feel very happy but also a bit sad because uncle (Mr Tan) could not be here today. But I felt like he was here beside me when I went on stage.

"I hope everyone will do something like me and not ignore people who are poor and handicapped. Actually, they don't want to be in this kind of situation. Don't neglect them."

She intends to use some of the $20,000 prize money to renovate her four-room HDB flat in Tampines, and will save the rest for her children.