PUTRAJAYA - Singapore and Malaysia are working towards a supplementary agreement to suspend a cross-border rail link between Woodlands and Johor Baru.

Singapore's Transport Minister Khaw Boon Wan said on Monday (April 8) that the attorneys-general and officials from both countries are working on an agreement to effect a suspension of the Rapid Transit System (RTS) Link.

Speaking at a press conference alongside his Malaysian counterpart Anthony Loke at Kuala Lumpur International Airport, Mr Khaw noted that Malaysia has requested a six-month suspension of the RTS Link so it can review key parameters of the project.

"We will approach this issue as we did for the suspension of the HSR project, with goodwill and reasonable accommodation," he said.

Singapore and Malaysia had earlier agreed to a two-year suspension of the Kuala Lumpur-Singapore High-Speed Rail (HSR) project, with Malaysia paying Singapore $15 million for abortive costs incurred due to the suspension.

Asked whether there would be any cost involved in suspending the RTS, Mr Loke said there will be costs involved, but this has to be determined by a review.

Mr Khaw also said that the civil aviation authorities of both countries will work together to develop GPS-based instrument approach procedures for Seletar Airport. 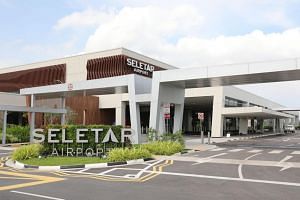 This is in place of the Instrument Landing System (ILS) procedures that Singapore has withdrawn, he added.

"We will introduce GPS-based instrument approaches from both the north over Pasir Gudang and south over Singapore island. This is because airplanes take off and land into the wind. With north-east and south-west wind directions at different times of the year, both approaches are needed," Mr Khaw said.

He added that the procedures are expected to be published soon, and will improve safety for flights using Seletar Airport.

The press conference by the ministers came after Singapore and Malaysia reached an agreement on recent air issues last week.

Mr Khaw and Mr Loke had said in a joint statement on Saturday (April 6) that "in the spirit of bilateral cooperation", Singapore will withdraw the ILS procedures for Seletar Airport, while Malaysia will indefinitely suspend its permanent restricted area over Pasir Gudang.

The agreement, implemented by the civil aviation authorities of both countries last Friday, paves the way for Malaysian carrier Firefly to begin flying into Seletar on April 21, more than four months after its flights were suspended.

On Monday, Mr Khaw said that both ministries have reached a "win-win outcome" after several rounds of discussions to understand each other's concerns and needs.

He also noted that a high-level committee has been set up to review the existing airspace arrangement in which Singapore air traffic controllers manage airspace over southern Johor.

It will be co-chaired by Singapore's permanent secretary for transport and Malaysia's secretary-general of transport.

Malaysia has said it wants to retake control of the airspace over southern Johor.

"I had explained to Minister Loke that the current arrangement was brokered by ICAO (International Civil Aviation Organisation) at a 1973 Regional Air Navigation Meeting. It was agreed upon by states in the region, and approved by the ICAO Council," Mr Khaw said on Monday.

"Minister Loke stressed that the review was important to Malaysia. I assured him that Singapore would approach the review with an open mind, bearing in mind the many stakeholders involved and the critical need to ensure safety and efficiency in a very busy airspace," he added.

"With goodwill and compromise, I am sure that a win-win solution which does not undermine each other's core interests can be found."

The dispute over Seletar surfaced in November 2018, when Firefly announced that it would not move from Changi Airport to the new Seletar Airport passenger terminal on Dec 1 - as it had earlier agreed to.

The Malaysian civil aviation regulator had objected to the move because of the introduction of an ILS at Seletar Airport, which it claimed would restrict developments at Pasir Gudang town nearby.

Countering Malaysia's objections, Singapore said repeatedly that the use of an ILS at Seletar Airport does not change existing height limits.

Following the disagreement over flight procedures for Seletar Airport, Malaysia declared a restricted zone over Pasir Gudang for the purpose of military activities.

This affected the flight path for aircraft heading to and from Seletar Airport, adding time and complexity.

On Jan 8, both countries agreed to simultaneously and immediately suspend for one month the restricted area at Pasir Gudang and the ILS for Seletar.

Singapore and Malaysia later agreed to mutually continue with the suspension till the end of March while the issues were discussed.