Spize Restaurant's River Valley outlet will close for good after the authorities terminated its operating licences over serious hygiene lapses discovered following a probe into a fatal food poisoning incident.

The National Environment Agency (NEA) will also charge the eatery in court for the lapses that led to an "unusually severe" outbreak of the Salmonella typhimurium bacterium, suggesting its food was heavily contaminated.

"Salmonella does not drop out of the sky. Bacteria does not walk to the door handle, it must have got there because the food handler's hands were dirty," NEA's public health director-general Derek Ho said at a briefing yesterday to provide updates on its probe.

The fatal case involved Sats officer Fadli Salleh, 38, who fell ill and died after eating a bento box prepared by Spize's River Valley outlet for a Deepavali celebration organised by security firm Brink's Singapore and held on its Kaki Bukit premises on Nov 6.

The cause of death is pending and has been classified as a coroner's case, said the joint statement by the NEA, Ministry of Health (MOH) and Agri-Food & Veterinary Authority of Singapore (AVA).

In all, there were seven food poisoning incidents linked to the River Valley outlet between Nov 6 and 9. Of the 221 people who had consumed food prepared there during this period, 82 reported falling ill.

A joint inspection on Nov 14 by the agencies had found lapses, such as having seven unregistered food handlers and preparing food outside the licensed kitchen area.

An earlier joint inspection on Nov 7, which later led to a suspension of the outlet's licences, found other lapses such as leaving ready-to-eat food uncovered in a chiller and not providing soap for washing hands.

A commonly occurring bacterium, Salmonella typhimurium was found in investigations of blood and stool samples from those who fell ill, as well as of the raw and ready-to-eat food, and environmental samples from the outlet. They were closely related by genetic analysis, suggesting that they are from the same source, said the agencies. 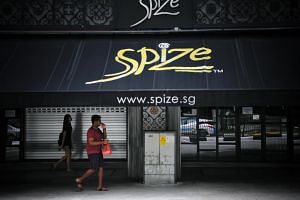 The salmonella bacterium was found in belacan egg fried rice. It was also found in raw chicken samples and kang kong. It is unclear what food Mr Fadli ate.

Associate Professor Vernon Lee, director for communicable diseases at MOH, said the investigations did not establish whether there was a long delay between the preparation and consumption of food from the restaurant outlet.

Spize, a popular supper haunt that opened in 1997, has four outlets, with others in Simpang Bedok, Rifle Range Road and Siglap.

Mr Ho said the River Valley outlet was last inspected in October and was given a written warning for a minor infraction in failing to provide enough covered refuse bins.

The incident involving Spize was among a number of food poisoning incidents last month that affected about 400 people.

The NEA and AVA will step up checks on food establishments during the festive season, but Mr Ho said regulators cannot be overseeing every operator all the time.

"As operators, if you want to be in this business, it is your duty of care to ensure that every meal you prepare meets those minimum standards. That is the strong message we want to send out," he added.

•Ready-to-eat food was left uncovered in a chiller.

•Soap was not provided for washing of hands at designated hand-washing basins in the kitchen.

•Knives for preparing ready-to-eat food were slotted in the gap between food preparation tables. The outlet was suspended on Nov 9.

•Seven unregistered food handlers were found, out of the 35 at the outlet.

•Unlabelled, ready-to-eat dried salted fish, chicken floss and fish crackers were found. They were to be discarded after the outlet was suspended.

•Eggs that were supposed to be discarded were dispatched to the Spize outlet in Rifle Range Road for use. The eggs were disposed of immediately.