The Health Ministry said yesterday it has linked nine more cases of food poisoning to food catered from the River Valley branch of restaurant Spize, bringing the total to 81 people. This comes as the one person who died, 38-year-old Fadli Salleh, was buried yesterday.

His family declined to speak to reporters. The Sats officer and father of two had been in critical condition at Sengkang General Hospital's intensive care unit.

Like others who fell ill, Mr Fadli had eaten a bento box prepared by Spize's River Valley outlet for a Deepavali celebration organised by security company Brink's Singapore and held on its premises at Kaki Bukit on Nov 6.

Speaking after news of Mr Fadli's death broke on Wednesday night, Spize co-founder Haresh Sabnani, 40, said that everyone in the company was "extremely saddened", and had sent their condolences to his widow and family.

"Spize River Valley management will provide all help and assistance that is needed to the family during this difficult time," he added. "Our sincere prayers are with them and all who are still recovering."

He also said that the restaurant was taking all measures necessary to cooperate with the Health Ministry and the Agri-Food and Veterinary Authority in investigations.

As of 5pm yesterday, nine people remained in hospital in stable condition, and 37 had been discharged, a Health Ministry spokesman said.

Meanwhile, customers of the popular eatery, which has three other outlets in Bedok, Rifle Range Road and Siglap, were undeterred by the incident.

When The Straits Times visited the outlet at Bedok Shopping Complex yesterday afternoon, regulars there said they would continue to patronise the restaurant.

At 7pm, nine of the more than 40 tables were occupied by diners.

"I think it is an isolated incident," said Mr Khairul Amin Mohd Sidik, 31, who has dined at Spize for the past 15 years.

"I still have faith in what they are doing because they have been around for a very long time, and they have a proven track record in providing customers with good food and tip-top hygiene."

But he also thinks Spize could be more forthcoming with customers about their efforts to deal with the incident.

"We haven't heard much from them," said Mr Khairul, who owns an events business.

"They should try to instil confidence in customers by perhaps closing their other outlets for a couple of days and doing a clean sweep of the premises." 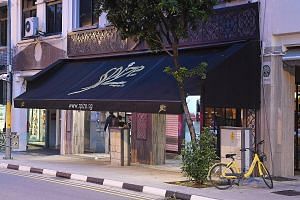 The River Valley outlet has been suspended by the National Environment Agency until further notice, while cleaning and sanitation works are being carried out.

According to an earlier statement from the authorities, several hygiene lapses were observed, including leaving ready-to-eat food uncovered in a chiller, and not providing soap for hand washing as the soap dispenser was faulty.

Staff working in that outlet have not been deployed to others, said Mr Haresh.