New restrictions on massage establishments have been met with dismay by businesses, particularly owners of 24-hour spas.

From March 1, massage parlours with CaseTrust accreditation or which conduct their services in plain view will have their operating hours restricted from 7am to 10.30pm. Those without the accreditation will be able to operate only between 10am and 10.30pm.

Mr Alvin Tee, one of the owners of the 24-hour The White Spa in Selegie Road, said he has appealed to the police. Most of its customers come in after 10pm. The business is CaseTrust-accredited, and has just renewed its two-year tenancy contract with the landlord and is currently in the process of renewing its massage licence.

The new conditions apply to existing licensees only when they renew their licences, unless they are in Housing Board estates, in which case these go into effect immediately. Mr Tee added he is worried that he may have to let go of staff, especially given the short notice.

G.spa, a 24-hour massage establishment located in Guillemard Road, said it has also made an appeal. Its licence is not up for renewal yet. "This will definitely affect our revenue," said assistant manager Lew Fook Choy.

The Sunday Times also spoke to the operators of five massage businesses - some of which have multiple outlets around Singapore - in the Bugis area.

All are CaseTrust-accredited and operate until early morning or round the clock. 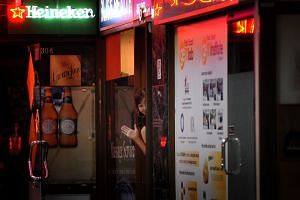 They said they have spoken to the Members of Parliament of their various constituencies, and are appealing against the changes.

One of the operators, who wanted to be known only as Mr Chua, said many customers come in after 10.30pm. The 56-year-old, who has been operating the foot reflexology spa since 2011, added: "In the daytime, we don't get many visitors. So if we close at 10 plus, we'd be losing a significant percentage of our clientele."

Architect Aileen Koh, 30, who often visits massage establishments after work or on late nights out, usually after midnight, said of the new rulings: "While it's great that the Government is taking the issue of illegal activities seriously, a better way to respond to this might be to perhaps have more checks on licensing, or perhaps instil a rating or ranking system to help the public know which parlours are credible."

The Spa & Wellness Association of Singapore said that most of its members are not affected by the new restrictions as they already operate within regular working hours. "Hopefully, the new regulations will help cut down illegal activities in residential areas," added its president Edward Wong.