SINGAPORE - From Thursday (March 1), massage parlours with CaseTrust accreditation or which conduct their services in plain view will have their operating hours restricted from 7am to 10.30pm.

But those without the accreditation have to abide by even shorter hours: from 10am to 10.30pm.

This is a further restriction from that implemented last August, where police allowed masssage parlours in Housing Board estates to operate only from 6am to 11pm.

Only CaseTrust-accredited parlours in designated areas like Orchard Road or Changi Airport, or those completely exempted from requiring a licence - like traditional Chinese medicine (TCM) clinics or manicurists - can continue to operate round the clock.

The tighter restrictions are the latest provisions under the new Massage Establishments Act, which was passed in November last year to crack down on vice activities, and will come into force on Thursday.

First-time offenders running without a licence could now face a fine of up to $10,000, and up to two years in jail. Repeat offenders could have their penalties doubled or more: a fine up to $20,000 and/or jail for up to 5 years.

And landlords must take reasonable steps to get such errant tenants to hand over the premises within a month, or face the same penalties. 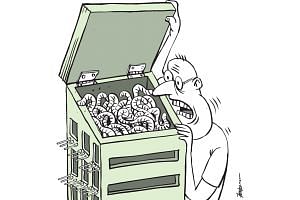 Chasing vice out of the HDB heartland

Should unlicensed operators continue to run their business after they have been charged, the police have warned they can "use reasonable force" to have the premises vacated and physically secured.

Those that flout the order to stop operations may face a maximum fine of $15,000, imprisonment of up to three years, or both - a move meant to "prevent recalcitrant unlicensed massage establishment operators from blatantly breaching the law whilst court proceedings against them are still ongoing", the police said in a statement on Wednesday (Feb 28).

And besides the tighter operating hours, all parlours must not put up indecent advertisements.

These new conditions apply to existing licencees only when they renew their licences, unless they operate in Housing Board estates - in which case, they come into effect immediately.

Violating these conditions could see licencees fined up to $5,000, and for subsequent offences, up to $10,000 and/or jailed up to two years. A licence may also be immediately suspended when a licencee or relevant person is charged with serious offences such as human trafficking or organised crime.

There will be some leeway, however. Some activities, like fish spas or manicure services, no longer require a licence, while other massage activities will be exempt from some rules if, for example, they are provided at hospitals or TCM clinics.

In addition, operators that require a licence and maintain a good track record could receive licences with validity periods longer than the standard one-year period.