SINGAPORE - One fan allegedly had her hair pulled, while others claimed to have been pulled out of the concert hall by the arm during a K-pop concert on Friday (Jul 13).

Their offence? Taking unauthorised photos or videos of Korean boyband Wanna One at their concert at the Singapore Indoor Stadium attended by a sold-out crowd of 9,500.

Unhappy fans went on social media afterwards to complain about what they said was the aggressive behaviour of security personnel at the concert.

A spokesman for concert organiser One Production, a subsidiary of Rock Records Singapore, told The Straits Times it will be speaking to Singapore Sports Hub about the matter.

"We are currently investigating this claim with Singapore Sports Hub and their security vendor," added the spokesman.

A concert-goer who wanted to be known only as Ms Beh, 23, said she had a rude shock when her elbow-length hair was pulled from behind an hour into the concert, after she was caught taking a picture of a member of the band.

She told ST: "This big-sized security guard pulled me by my hair with so much force that I fell backwards and broke one of my high-heeled shoes. He held on to my hair until I was out of the crowd, and afterwards he grabbed me by my backpack and pushed me to move out of the concert hall.

"I saw him pulling other girls' hair as well," added Ms Beh, who works in public relations. 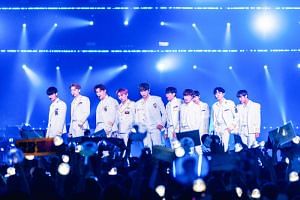 K-pop group Wanna One just want to please their fans

She had bought a Standing Pen A ticket for $292 and secured a spot near the front after queuing for three hours. Her friend, who was with her, was pulled out of the concert hall by her arm.

Ms Beh added: "Outside the venue, another security personnel told my friend and I that the pictures we took were copyrighted and that we had to delete the photos, from the 'recently deleted' folder as well."

The 10-minute encounter ruined the concert for Ms Beh.

She said: "I was shocked at first, then scared, then angry because he caused me to miss out on parts of the concert, and I also lost my spot near the front in the standing pen."

Student Nur Aziemah Azman, 18, said she had her ticket torn into three pieces by a security guard after being caught taking a video of the 11-member boyband performing her favourite song, Always.

She was dragged out and quickly deleted the photos and videos on her phone, but the security guard took her ticket and tore it. "I cried and my heart broke into pieces," she added.

Secondary school student Mishel Miaqie, 16, said that she too was pulled out of the hall by her arm.

"I've been to 20 K-pop concerts, but by far this had the worst security. Usually the security (personnel) would shine their torchlights on you if you're caught taking photos. But last night, they just grabbed me and my friend from behind," she said.

Singapore Sports Hub, which sold the tickets and provided the venue for the concert, had said on its page for the Wanna One concert that "strictly no photography and videography are allowed". It also said that One Production can refuse admission or evict any person whose "conduct is disorderly or inappropriate".

The spokesman for One Production said that the no photography or videography condition was printed on the concert tickets, and audio clips were played several times before the start of the concert as a reminder.

She said over 100 security personnel were deployed for the concert.

"The security personnel deployed for the concert were mainly from the Singapore Sports Hub. We only provided the security at the stage and backstage areas to ensure the safety of the artiste," added the spokesman.

Singapore Sports Hub said security personnel were on the ground "to ensure that concert-goers were safe and sound".

"Security members also were tasked to see that no photography or videography was permitted during the performance, as requested by the hirer. For those found taking photos, they were asked to delete the photos."

He added that there was a venue manager on duty for all Sports Hub events, whose responsibility is to "ensure a fun, memorable, and more importantly, a safe event".