SINGAPORE - If there is one thing you can count on at a K-pop concert, it is the legions of screaming fans. And Wanna One's One: The World held on Friday (July 13) at the Singapore Indoor Stadium was happy to place fan service front and centre.

The 11-man group comprised of contestants who were still standing at the end of last year's gruelling idol-making reality competition, Produce 101.

They kicked off their first show in Singapore with high-energy numbers like Burn It Up, the appropriately named Energetic and earworm number Boomerang.

Rookies they might be, but Wanna One certainly showcased their potential during the opening segment, checking off a list of all things K-pop. Dangling earrings? Check. Complicated dance moves? Check. The inevitable rap portion in every song? Check.

They were good as a group, but it felt almost generic at times - as if their songs could belong to other groups. The individuality of the members and their talents were lost in the large size of the group.

Perhaps that was why the unit performances stood out.

Ha Sung-woon, for one, has a beautiful clear voice, but it only shone when he belted out a ballad beside Hwang Min-hyun and Yoon Ji-sung. 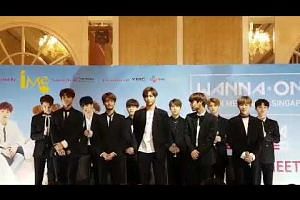 First fan meet in Singapore for Wanna One, one of K-pop's most wanted boybands

The four unit performances featured two to three members at a time. And they worked given that fans started out rooting for specific contestants on the show.

The stage was kept simple and maximised for fan engagement. It extended into different corners of the mosh pit, allowing members to get up close and personal with fans.

The video clips played between song segments did not seem to provide an overarching storyline, but they did a good job of zooming in on the lovingly lit faces of the members.

And it was no surprise that the camera knew exactly when Kang Daniel - who finished first in the competition - would lift up his shirt to show off his admittedly impressive abs.

There was also a long talk portion where members acted out different scenarios like how they would react after a delicious meal of chilli crab, which fans seemed to love.

Given that this is likely their last concert as a group in Singapore, is this not the best time to give the fans what they want?