The 22-year-old full-time national serviceman died last Saturday after a Bionix armoured vehicle reversed into a Land Rover he was driving as part of a field training exercise in the Jalan Murai training area.

Mr Yann Wong, 36, who taught CFC Liu physics for two years from Secondary 3, described him as determined and bright.

CFC Liu participated in the school band, of which Mr Wong was in charge. He played the flute.

"He was an above-average student, worked hard and made it to Nanyang Junior College," said Mr Wong, who attended CFC Liu's wake yesterday at a Housing Board block in Woodlands Crescent.

He added that CFC Liu had kept in touch with his classmates through the years.

"He was quite a quiet boy, but was quite sociable. He has a WhatsApp group chat with his classmates. Just three months back, they had a class gathering," Mr Wong said. "Like every kid his age, he was a bit mischievous at times."

He also said CFC Liu blended right in with the other students.

CFC Liu, said to be a Singapore permanent resident, hailed from China. His body arrived at the wake at about 7pm last evening.

A memorial service started at 8pm and lasted for an hour. The service was conducted in Mandarin. 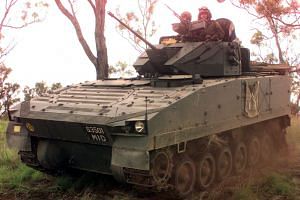 According to eulogies delivered during the service, CFC Liu came to Singapore when he was in primary school, and was committed to living and growing up here.

About 80 people attended the service, including his family, former schoolmates and members of his church.

CFC Liu's father, mother and two elder sisters were present. They declined to speak to reporters.

CFC Liu, a transport operator from the Singapore Armed Forces' Transport Hub West, was posthumously awarded the rank of CFC.

Following his accident, an army-wide safety timeout on training has been called to ensure all appropriate safety measures are in place.

The Defence Ministry said police investigations are ongoing, and an independent Committee of Inquiry will be convened to investigate the circumstances leading to the incident.

CFC Dave Lee died of heat injuries following an 8km fast march in April, while Third Sergeant Gavin Chan was killed during an overseas exercise in Australia in September last year when the Bionix tank he was commanding overturned on a steep embankment.

The SAF had an average of about one NS training-related death a year over the past two decades.

There were no NS training deaths from 2013 to 2016, said Defence Minister Ng Eng Hen in May.

In his ministerial statement to the House, Dr Ng had stressed the need for the SAF to "make zero training deaths the norm".