SINGAPORE - Singaporeans should defer non-essential travel to Hong Kong while those already in the city are advised to take precautions in the wake of large-scale protests there, the Ministry of Foreign Affairs (MFA) said on Friday (Oct 4).

In a travel advisory posted on its website, MFA said that since June, the protests in Hong Kong have become increasingly unpredictable. The ministry also warned that they can take place with little or no notice, and could turn violent.

MFA cited several upcoming protests in various areas in Hong Kong over the next few days.

A protest march from East Point Road in Causeway Bay to Chater Garden is also expected to take place at the same time.

On Sunday afternoon, a rally is planned at Victoria Park in Causeway Bay, while on Monday evening, a rally is expected outside Prince Edward MTR station.

MFA noted that several of these protests could spill into other areas.

The ministry advised Singaporeans in Hong Kong to stay vigilant, monitor developments through the local news, and heed the instructions of the local authorities. 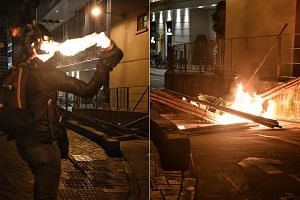 Singaporeans should avoid the protests and large public gatherings, while maintaining contact with family and friends so their safety is known, it added.

The protests that have spanned more than five months were sparked after the Hong Kong government mooted a controversial extradition Bill that would allow the authorities to extradite people to jurisdictions which Hong Kong has no formal extradition agreements with, including mainland China.

But the protests have since morphed into a broader movement seeking universal suffrage and an independent probe into alleged police brutality.

Hong Kong leader Carrie Lam's withdrawal of the extradition Bill on Sept 4, which she had hoped would help ease months of unrest, has so far failed to appease some activists.

MFA encouraged Singaporeans in Hong Kong to eRegister with the ministry so they can be contacted should the need arise.