SINGAPORE - The Singapore system is not perfect in improving the lives of the low-income and vulnerable families, but it has performed better than most countries, said the Ministry of Social and Family Development (MSF) in a first-of-its-kind report released on Thursday (Nov 1).

In an occasional paper that illustrates the efforts and the progress Singapore has made in improving social mobility, the ministry said many of its measures have worked well in boosting progress and social mobility.

"But the same measures now bring new challenges that we need to address, to ensure that stratification is not enshrined and social mobility continues to be spurred," it added.

Going forward, it will have to adapt policies in response to changing circumstances and needs as well as to learn from past experiences.

"We will keep studying fresh ideas and approaches, including those from other societies, and try them out where they have promise to help improve Singapore and the lives of Singaporeans," added the MSF.

"But we must not forget that trade-offs are unavoidable in social policy, and all too often good intentions have led to counterproductive results."

Social inequality and mobility have dominated the national discourse in recent weeks.

At an Institute of Policy Studies event last Thursday (Oct 25), Deputy Prime Minister Tharman Shanmugaratnam noted that safeguarding social mobility would get more difficult as Singapore progresses because that is the nature of a meritocratic system.

"Those who succeed try to help their children and those who haven't succeeded find that the odds increase against them doing well in life," he said. 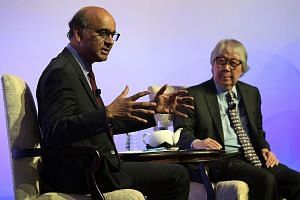 A key step in tackling income inequality is to ensure that everyone in society - including those in the middle class - continues to progress, said Mr Tharman, as he gave the analogy of being on an escalator that has to keep moving so that everyone is better off.

Education Minister Ong Ye Kung said at a separate event last Wednesday that meritocracy has given many a better life through their talent and ability, but as families prosper, they spare no effort to ensure that their children do well too. This has led to children from different backgrounds beginning at different starting points in life.

Still, when it comes to educational progress, the results are encouraging, according to the 31-page paper released by MSF.

For example, nine in 10 students from the bottom 20 per cent of households by income made it to post-secondary education today, up from five in 10 students 15 years ago.

And 15-year-olds here from disadvantaged backgrounds have performed consistently better, in areas such as maths and science, than those of similar backgrounds in other developed countries, going by the Programme for International Student Assessment (Pisa) test.

Education is among several areas highlighted in the paper, which also lists government schemes and policies in employment, home ownership, and healthcare to improve the lot of the vulnerables.

It said the employment rates for Singaporeans and permanent residents have also risen in the past decade, especially for the older workers. For workers aged 65 and older, the employment rate rose from 14.4 per cent in 2007 to 25.8 per cent last year.

The Workfare Income Supplement (WIS) has been one of the most effective schemes in getting people, especially the older workers, to work, the report noted. The WIS scheme encourages low-wage workers to work, by providing Central Provident Fund top-ups and cash supplements. For example, a 60-year-old earning $1,200 a month gets $300 more through the WIS.

Home ownership is another area Singapore can be proud of.

Some 87 per cent of Singaporeans in the bottom 20 per cent by resident household income own their homes, which is significantly higher than in other cities.

Besides, aided by significant housing grants and affordable prices of flats, more poor families are moving out of heavily subsidised rental flats to become home owners.

There were about 500 such families in 2013 and this doubled to almost 1,000 households last year. The numbers applying for a rental flat have also fallen by 44 per cent in the same time period (between 2013 and 2017).

Mr Leonard Lim, research associate at the Institute of Policy Studies, pointed out that Singapore's Gini coefficient, after taxes and transfers, is lower or comparable to developed countries like the United States - a testament to the Government's efforts to redistribute income.

He added: "Education is the engine that powers social mobility. Hence, the moves to intervene early in education are most significant to me, as they are an indication that this Government is intent on breaking any significant cycle of inter-generational transmission of poverty."