SINGAPORE - Relations between Singapore and Malaysia are set for greater uncertainty if the first three months of the new Pakatan Harapan government are anything to go by, said regional watchers on Monday (Aug 13) at a forum.

Singapore's concerns about a government led by Tun Mahathir Mohamad have not been assuaged by the way he has conducted relations with Singapore since he took charge after the May general election, especially over issues better negotiated in private, they said.

Professor Joseph Liow, dean of Nanyang Technological University’s College of Humanities, Arts and Social Sciences and S. Rajaratnam School of International Studies, said: "The first 100 days have set the stage perhaps for even more uncertainty, in terms of what buttons the Mahathir-led government is going to press in its bilateral relationship with Singapore."

Singapore's Government already had its concerns, given the "less than pleasant" experiences with Dr Mahathir during his previous stint as prime minister from 1981 to 2003.

"It's understandable that there's some measure of concern, which is not helped by the way Dr Mahathir conducted relations with Singapore," said Prof Liow at the forum held by The Straits Times and sponsored by OCBC Premier Banking.

For instance, his public comments in recent months on cancelling or deferring the Kuala Lumpur-Singapore High Speed Rail, without officially informing Singapore, were not the best way to conduct diplomacy, said Prof Liow.

Dr Mahathir raising the issue of the Water Agreements, one of his major bones of contention in his earlier stint as prime minister, could also be a negotiating tactic, he said. 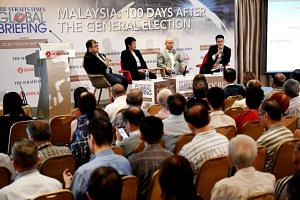 Too early to tell if Pakatan Harapan will govern Malaysia better: Panel at ST Global Briefing

"We should not discount the fact that Mahathir has always liked to 'poke' Singapore," he added.

His fellow panellist, OCBC economist Selena Ling, said: "A lot of the ministers have memories of how the last Mahathir regime panned out for Singapore."

This could shape how they view the Pakatan Harapan government, which could make future relations challenging, she added.

Questions on the relationship between Singapore and Malaysia dominated the question and answer time at the forum, with participants also interested to hear whether Pakatan Harapan's victory could be replicated in Singapore.

The Pakatan Harapan coalition of four parties successfully teamed up despite past bitter quarrels between some of their leaders, and toppled the Umno-led government which ruled Malaysia without interruption for 61 years.

The panellists, however, did not think a similar regime change was likely in Singapore, despite seven opposition parties getting together recently to discuss forming a coalition led by former People's Action Party MP Tan Cheng Bock.

Said panellist and ST's Malaysia bureau chief Shannon Teoh: "No disrespect to the opposition politicians in Singapore, but they're not Mahathir Mohamad. When Tun Mahathir entered the opposition in Malaysia, it was a huge milestone.

"No previous prime minister had ever joined the opposition, and he was not just any PM but the longest-serving PM," Mr Teoh added.

Said Prof Liow: "What happened in Malaysia was a major rejection of Najib (Razak) and what he had done or not done to the country and its economy, first and foremost.

"Until you have a similar setting in Singapore, the context is fundamentally different."