KUALA LUMPUR (BLOOMBERG) - Malaysian Prime Minister Mahathir Mohamad has revived the muscular foreign policy that characterised his first stint in power, seeking to renegotiate a longstanding water supply agreement with Singapore and taking shots at both the US and China.

In an interview with Bloomberg Television's Haslinda Amin, the 92-year-old Mahathir criticised a 1962 water supply deal with Singapore as "too costly," adding to tensions after he announced plans to cancel a multibillion-dollar high-speed rail project that would have connected Kuala Lumpur to the city-state.

Water is among issues with Singapore "that we need to settle," Mahathir said on Friday (June 22) at his office in Kuala Lumpur. "We will sit down and talk with them, like civilised people."

Breaking from his predecessor Najib Razak's more pragmatic diplomacy, Mahathir also said he is reviewing Chinese investments and called US President Donald Trump "mercurial." Neither country should vie to become the region's leading superpower, he said.

"This is the cause of all tension, where you have people trying to be leaders of the world," Mahathir said. "We should be equal partners."

Mahathir's willingness to push back against the world's biggest economic powers contrasts with Najib, who golfed and dined with US presidents and dubbed himself a "true friend" of China. His comments recall his run in power from 1981 to 2003, when he bickered with Singapore on water and land issues, tussled with the International Monetary Fund and dubbed billionaire US financier George Soros a "moron" for his role in the ringgit's drop.

Singapore perhaps has the most at stake. The country has relied on neighbouring Malaysia for nearly half of its water needs through water agreements, the first of which dates back to 1927. The remaining 1962 accord, which expires in 2061, gives Singapore 250 million gallons of raw water daily at 3 sen per 1,000 gallons, and Malaysia buys back a portion of that at 50 sen (S$0.17 cents) per 1,000 gallons.

The pacts have been a constant source of public political wrangling, with both nations even resorting to placing full-page ads in regional newspapers to air their gripes. At one point former Singapore Prime Minister Lee Kuan Yew said he was prepared to send troops to Malaysia if it tried to turn off the taps. Calls to Singapore's Ministry of Environment and Water Resources went unanswered on Sunday (June 24).

In the interview, Mahathir said he would be friendly with Singapore and other nations while focusing on striking fair deals and ensuring balance.

"I think we can benefit from each other," Mahathir said. "We need the expertise of Singapore. Lots of Singapore people invest in Malaysia because it's much cheaper here." 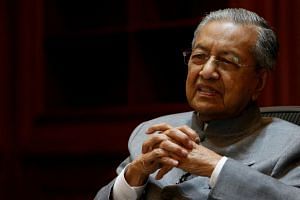 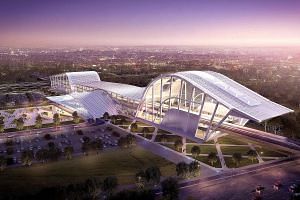 End of the line for the high-speed rail? The losers and winners

As for US President Donald Trump, Mahathir called him "mercurial." "He changes his mind within 24 hours," he added, citing the example of Trump's flip-flopping decision on whether to meet North Korean leader Kim Jong Un at a summit in Singapore earlier this month. "When you have a man like that, you need to be cautious."

While Najib's administration rushed to complete legal changes needed to implement the Trans-Pacific Partnership, Mahathir called for a revision of the 11-nation trade pact to protect the interests of small and weak economies. Some terms the US inserted before it withdrew placed countries like Malaysia at a disadvantage, he said without elaborating.

'PROTECTION FOR THE WEAK'

"I don't believe in free trade, absolute free trade, because when the competition is between the weak and the strong, you need to have some protection for the weak," he said. Malaysia would also find ways to counter unfavourable policies if it is targeted by Trump, he added.

During the campaign, Mahathir pledged more scrutiny on Chinese investment, which has stoked political tensions from Australia to Sri Lanka and triggered fears over sovereignty and economic inequality in the trade-dependent nation. Najib had dismissed these concerns as "scare-mongering" and said the commercial ties were key to a healthy, diversified economy.

Malaysia is strategically placed on Strait of Malacca, through which about 40 per cent of global trade flows. That makes it a prime destination for China's Belt and Road Initiative that aims to finance hundreds of billions of dollars worth of infrastructure in emerging markets.

Since taking power, Mahathir has raised questions about the US$34 billion (S$46.2 billion) worth of government-backed projects, including a gas pipeline and East Coast Rail Link that's estimated to cost 55 billion ringgit. "We will have to slow down, defer and things like that, simply because we do not have the money," Mahathir said.

As before, Mahathir wasn't worried about his critics. "I want to turnaround the economy to grow once again, to achieve developed country status within the shortest possible time," he said. "Whether people appreciate me or not, is not relevant. Once I'm dead, they will say nasty things anyway."