SINGAPORE - The terrorist attacks in Sri Lanka on Easter Sunday are aimed at creating conflicts and hatred among communities, President Halimah Yacob said on Sunday (April 21), offering condolences to the families of the victims and the injured.

"An occasion of peace and worship with families and friends has been turned into a carnage. These vile acts of violence by extremists are absolutely shocking and are aimed at creating conflicts and hatred among the communities," Madam Halimah wrote on Facebook.

"We must continue to stay vigilant and united against such acts of terrorism. Our prayers for all those affected and for the people of Sri Lanka," she wrote.

"Singapore condemns such senseless acts of violence. We stand firmly behind Sri Lanka in its efforts to preserve the hard-wrought peace and stability," he wrote in a Facebook post. "Our thoughts and prayers are with the people of Sri Lanka. May they find strength and unity to overcome this adversity together."

He advised any Singaporeans in Sri Lanka who required consular assistance to contact the 24-hour MFA Duty Office.

Foreign Minister Vivian Balakrishnan said he was "heartbroken by the senseless violence" across Sri Lanka.

"Such dastardly acts of violence are deeply reprehensible, especially on a day of joy and hope for Christians. Our prayers go out to the victims and their families," he said in a Facebook post on Monday (April 22).

The Singapore Government strongly condemns the heinous acts of violence in Sri Lanka, the Ministry of Foreign Affairs said in a statement, adding that there were no reports of Singaporean casualties in the incidents so far.

"We convey our condolences to the families who have lost their loved ones and our wishes for speedy recovery of those injured. MFA has reached out to Singaporeans who are e-registered in Colombo, Sri Lanka. Thus far, there are no reports of Singaporean casualties in the incidents," the MFA statement said.

The Singapore Honorary Consulate-General in Colombo is in close contact with the Sri Lankan authorities and is monitoring the situation closely, the statement said.

"Singaporeans in Colombo should remain vigilant, follow the advice of the local authorities, stay in touch with their family and friends so that they know you are safe," it said. 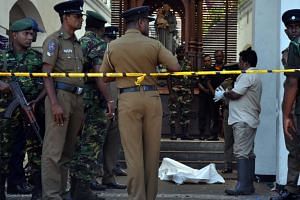 Minister for Home Affairs and Law K. Shanmugam said in a Facebook post that Sri Lanka was a beautiful country that he had visited several times, both for work and on private trips.

"Given the nature of the attack, it is not possible to rule out terrorism - organised, on Easter Sunday, targeting several churches and hotels," wrote Mr Shanmugam.

"It is heart-breaking to think of the people who went to Church, to pray, who got killed. And those who went to Sri Lanka, for the long weekend, and died in the hotels. Our thoughts and prayers go to their families."

He noted that the world was witnessing such terrible actions every few weeks.

"Those who planned the attack, those who carried it out, must face the most severe punishments. It is difficult to think of a worser form of human beings - killing people who go to pray, spread hatred and terror. The ideology that spread the hate must be dealt with," he wrote.

He lamented that the multiple bombings on churches and hotels took place on a day when Christians were observing Easter Sunday.

Mr Masagos, who is also Minister for the Environment and Water Resources, noted in a Facebook post that the blasts came in the wake of an attack on Muslim worshippers in Christchurch during Friday prayers.

"I am saddened by the loss of innocent lives in Sri Lanka. Quick on the heels of an attack on Muslim worshippers doing Friday prayers in Christchurch, we now have news of the blasts at hotels and churches in Sri Lanka while Christians observe Easter Sunday," he wrote.

"We should be outraged by anyone attacking innocents at religious congregations. My deepest condolences to our Christian friends, who will feel the most hurt."

Mr Masagos underlined the need for people to stay united and remain vigilant after the attacks.

"We must not let this attack create divisions within our society. This is a stark reminder that terrorism remains a serious threat across the world," he wrote.

"Singapore stands in solidarity with the people of Sri Lanka to strongly condemn these vicious acts of terror."

"We are deeply saddened to see another act of terror on places of worship and on peaceful worshippers. Such despicable acts of violence have no place in society, and we stand in solidarity with the affected communities," the statement said.

"Islam is a religion that calls for peace and harmonious relations between communities of different faiths. Islam respects the sanctity of religion and human life and calls for the protection of all worshippers and places of worship," it said.

"Our thoughts and prayers are with the people of Sri Lanka in these difficult and trying times."