NUSA DUA (BALI) - Singapore and Indonesia have accomplished much together in the last few years and can do much more together for the long-term benefit of their people, Prime Minister Lee Hsien Loong said on Thursday (Oct 11), as he and President Joko Widodo announced several new initiatives to take the relationship forward.

Speaking to the press alongside Mr Joko at the end of their annual Leaders' Retreat, PM Lee said they had a fruitful discussion on ways to deepen cooperation, a point also made by President Joko.

He expressed his appreciation and thanks to Singapore for being one of the first countries to offer help when Lombok, Palu and Donggala were hit by natural disasters this year.

"In the midst of this global economic uncertainty, economic cooperation was our focus," Mr Joko said, welcoming the currency swap and repurchase agreement between Bank Indonesia and the Monetary Authority of Singapore.

Two out of three agreements signed earlier in the day, which both leaders witnessed, will drive economic cooperation, the President added.

One of these was a Bilateral Investment Treaty, which establishes rules on how each country should treat investments and investors from the other nation.

It ensures protections for investors and gives them access to international arbitration in the event of investment disputes.

Singapore is Indonesia's largest investor, with US$8.4 billion in realised investments in 2017. Both are also among each other's top trading partners and sources of visitor arrivals.

The other agreements are on financial technology cooperation and cultural cooperation between the two neighbours.

Another agreement signed on Thursday, between Enterprise Singapore and Indonesia's Ministry of Industry, will foster deeper relations so that the two countries can learn from each other on how industries can keep up with rapid technological change.

Speaking after Mr Joko, PM Lee announced a project to develop a new RISING fellowship programme. The term, conceived when both neighbours marked the 50th anniversary of diplomatic relations last year, is an amalgamation of "RI" for the Republic of Indonesia and "SING" for Singapore. 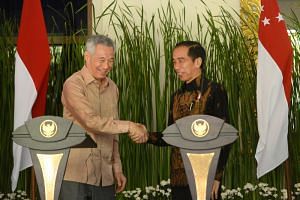 Said Mr Lee: "We hope every year to welcome more than a dozen leaders and officials, promising young people from Indonesia - not just Jakarta but also the provinces and other cities - to come and visit us, to make friends, appreciate how we can work further together, what are the things which we can learn from each other."

PM Lee noted that in the area of tourism, cooperation has also been intensifying, with three new cruise itineraries added since last year. These are expected to take more than 50,000 visitors to Bintan, Surabaya, and North Bali by the end of this year.

An agreement signed on Thursday between Indonesian terminal operator Pelindo III and Genting's Star Cruises will encourage more cruises and facilitate the upgrading of Celukan Bawang port in Bali, and explore the upgrading of other ports managed by Pelindo III, such as Tanjung Perak port in Surabaya, he said.

PM Lee also highlighted defence and security collaborations, which he said have grown from strength to strength.

"Our cooperation will continue during the next few months and I'm sure after the elections they will pick up strength again and will strengthen and grow further every year," Mr Lee added, as he wished Mr Joko a smooth election next year.

Mr Joko is seeking a second five-year term at the April 2019 presidential election.