SINGAPORE - Singapore and Indonesia are neighbours by geography, but partners by choice, and the breadth and depth of cooperation between them reflect an enduring and maturing partnership, said Prime Minister Lee Hsien Loong on Thursday (Sept 7), as the two countries marked 50 years of bilateral relations.

"Generations of leaders have taken a long-term and win-win approach to cooperate for mutual benefit and solve problems amicably and rationally," said PM Lee. "As a result, today we have a strong partnership based on mutual trust and respect."

PM Lee was speaking to the media at the Istana during a joint press conference with President Joko Widodo, after the two leaders concluded a series of high-powered meetings, held as part of this year's Singapore-Indonesia Leaders' Retreat.

His words were echoed by President Joko, who was in Singapore for his second retreat with PM Lee in as many years.

"We are neighbours by God's will, by geography, but we are and always will be good neighbours and close friends by choice," said Mr Joko, popularly known as Jokowi. 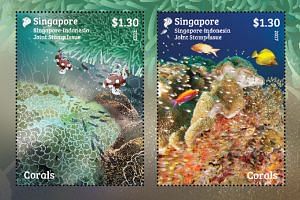 RISING50: Celebrating 50 years of bilateral relations between Indonesia and Singapore

The two leaders had held a "four-eye" meeting before the Indonesian delegation sat down with their counterparts from Singapore, including Deputy Prime Minister Teo Chee Hean, for bilateral talks.

PM Lee said he had a "good meeting" with President Joko, where they took stock of the bilateral relationship, which encompassed cooperation in the economy, trade and investments.

"We have a constructive relationship, we meet regularly and on many issues, we have a meeting of minds," said PM Lee.

The two leaders also discussed how Singapore and Indonesia could deepen bilateral cooperation, and followed up on discussions from last year's retreat, which included the Kendal Industrial Park in Central Java that PM Lee said was doing well.

"We have cooperated in disaster and humanitarian management, and counter-terrorism, I share President Jokowi's concern over the growing terrorist threat in our region and we agreed to work closely on this issue," said PM Lee.

President Joko also shared his personal efforts in tackling the trans-boundary haze, which has improved in the last two years, said the Prime Minister.

The President reiterated the importance of  Indonesia and Singapore in Asean, of which both nations are founding members when the regional group was established in 1967.

"Next year, Singapore will become the Chair of Asean, I have expressed Indonesia's support for Singapore's chairmanship," said Mr Joko. "Asean unity and centrality must always be our chief concern so that Asean remains relevant for its members and its people, as well as contribute even greater to the world."

Mr Joko also said the future holds many new challenges but he was "glad that the  discussion this morning with PM Lee was focused on our cooperation ahead, including the development of digital economy".

Earlier, PM Lee and President Joko unveiled a commemorative stamp, and witnessed the signing of four memoranda of understanding (MOU) at the Istana.

These agreements followed five other MOUs that were signed in the presence of ministers from both sides.

These were mainly agreements between MORTHE and educational institutions such as the National University of Singapore (NUS) School of Computing, Singapore Polytechnic and the Institute of Technical Education.

Diplomatic relations between the two Asean nations were established on Sept 7, 1967, and a series of activities to commemorate the milestone has been organised around the theme of "Trusted Partners, RISING Together". RISING50 is an amalgamation of "RI" for the Republic of Indonesia and "SING" for Singapore.

The day started with PM Lee and Mrs Lee hosting President Joko and First Lady Iriana to a private breakfast at the Singapore Botanic Gardens, before the two leaders planted the “RISING Tree” to commemorate the golden jubilee of bilateral relations.

Celebrations will continue at the Marina Bay Cruise Centre in the afternoon, where the leaders will witness a fly-past by fighter jets from the Singapore and Indonesia air forces, which will take to the skies over Marina South and form the numeral "50" to mark the occasion.