SINGAPORE - More than 15 flights between Singapore and Japan have been retimed, and two others have been cancelled as airlines prepare for Super Typhoon Hagibis, which is expected to hit Japan on Saturday (Oct 12).

According to Scoot's website, two flights between Singapore and Taipei on Sunday have been cancelled and passengers will be reallocated seats in later flights.

The cancelled flights are TR996 from Singapore to Taipei at 8.50am on Sunday and TR997 from Taipei to Singapore at 2.35pm on the same day.

Three Scoot flights originally scheduled to depart from Singapore for Japan on Saturday have also been retimed, with one going to Tokyo delayed by a full day.

Scoot flight TR805 arriving in Singapore from Osaka is expected to depart Japan at 9am on Sunday, instead of at 7.35pm on Saturday.

To compensate affected passengers, Scoot has offered a full refund in the form of a travel voucher, or no additional charge to passengers wishing to rebook their flights for a later date not more than 14 days from the affected flight. The rebooked flights must have the same origin and destination as the original flight, with seats subject to availability.

For Singapore Airlines (SIA), 13 of its flights on Saturday have been retimed, with six moved to an earlier time to give a wide berth to the super typhoon. 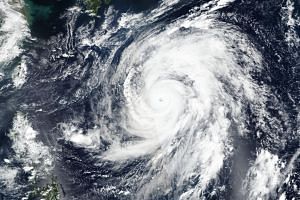 Tokyo on high alert as Typhoon Hagibis draws near

Initially planned for 1.20am on Saturday, SQ672 from Singapore to Nagoya will now leave on Friday at 11.20pm, while its corresponding return flight SQ671 departing from Nagoya has also been retimed from 10.30am on Saturday to 8.05am on the same day.

The arrival timings for two flights from Osaka to Singapore on Saturday, SQ619 and SQ621, have also been changed from 4.40pm to 1.15pm, and from 11.05pm on Saturday to 1.50am on Sunday respectively.

SIA said on its website that SQ12 from Singapore to Los Angeles via Tokyo at 9.25am on Saturday has also been affected. The retimed flight will now fly directly to Los Angeles at 11.55am on the same day.

Meanwhile, flight SQ632 from Singapore to Tokyo Haneda has been brought forward from 8am on Saturday to 5am on the same day.

Flight SQ633 from Tokyo Haneda to Singapore has been retimed from 5.05pm on Saturday to 2pm on the same day.

Flight SQ634 from Singapore to Tokyo Haneda will be delayed by 12 hours, from 1.55pm on Saturday to 1.55am the next day.

SIA added it will provide further updates on flights serving Tokyo Narita airports when it has more information.

Japan Airlines (JAL) also warned passengers on its website that flights departing from or arriving in Tokyo Haneda, Tokyo Narita, Nagoya Chubu and Osaka Kansai airports over the weekend have been or are expected to be cancelled or delayed.

Both JAL and All Nippon Airways (ANA) said telephone lines are currently very busy due to the flight disruptions, with ANA advising passengers seeking refunds for their disrupted flights to call after Oct 15 when the bottleneck is expected to have eased.

Super Typhoon Hagibis, which experts have said could cause grave damage in Tokyo, has already caused the cancellation of two Rugby World Cup games, the first time this has happened in the tournament.

It is also disrupting this weekend's Japanese Grand Prix in Suzuka, with Saturday's qualifying session postponed to Sunday morning.

Different terms - hurricanes, typhoons and cyclones - are used around the world to describe low-pressure circular storm systems with winds of more than 120kmh that form over warm water. The term typhoon is used for storms that develop in the north-western Pacific and usually threaten Asia.