SINGAPORE - Singapore Airlines (SIA) group chief executive Goh Choon Phong has apologised after oxygen masks were deployed on a Scoot flight from Singapore to Taipei on Sunday (March 24) as a precaution.

There were 178 passengers on the flight.

In response to media queries, Scoot, the budget arm of SIA, said on Wednesday (March 27) that the pilots on Flight TR996 had switched on a back-up power unit to prevent an overweight landing caused by excess fuel.

This led to a slight loss of cabin pressure.

While the safety of the flight was not compromised, the pilots decided to deploy the oxygen masks as a precaution, Scoot said.

"We acknowledge that this precautionary measure by our pilots has caused anxiety and inconvenience to our passengers and for this, we apologise," Mr Goh said.

"We would like to take this opportunity to thank our passengers for their patience and understanding." 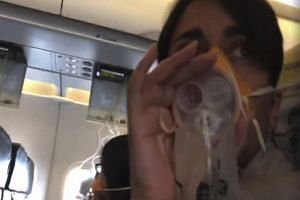 In its statement, Scoot also thanked the authorities and ground partners at Taipei's Taoyuan International Airport for their assistance.

On Sunday, oxygen masks were activated during the plane's descent.

In a video posted by one of the passengers on the flight, the pilot can be heard telling passengers to pull down the masks to activate oxygen flow.

A female passenger who was travelling with an infant said that her child vomited during the descent.

There were no other reports of injuries or major discomfort, a Scoot spokesman told The Straits Times on Sunday.

On Tuesday, Scoot said it would be retraining the pilots who operated Flight TR996, after they had made some "procedural decisions" which contributed to the slight loss of cabin pressure.