Singapore budget carrier Scoot will be retraining the pilots who operated Flight TR996 from Singapore to Taipei on Sunday, after their decisions led to a drop in cabin pressure and the activation of oxygen masks.

In a statement to The Straits Times yesterday, Scoot said preliminary investigations revealed that the pilots had made some "procedural decisions" while the plane was descending that contributed to a slight loss of cabin pressure.

While the flight would have continued on safely, the pilots nevertheless decided to deploy the oxygen masks as a precautionary measure, Scoot added. The airline said that the pilots will undergo retraining "to address the gaps". It also apologised for the anxiety and inconvenience caused to passengers.

Ms Harpeet Kaur Bedi, one of the 178 passengers on the flight, shared footage of the incident on Facebook on Monday. She said she initially thought that the masks had been deployed by mistake, and that was when she took out her phone and started taking a video.

In her video, the pilot could be heard telling passengers to pull down the masks to activate the oxygen flow. A child could be heard screaming in the background.

However, when she realised the gravity of the situation, she then filmed another video telling her children that she loved them. "I really thought I was going to die. All I could think of was how much damage my death would do to the kids, but I wasn't scared for myself," she said.

She added that there was also a smell of burnt wire in the cabin. 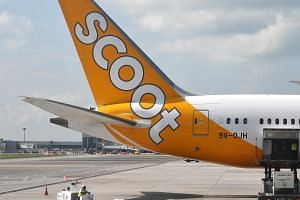 Scoot said that the aircraft landed safely at the Taoyuan International Airport at around 1.15pm local time.

A mother who was travelling with her baby said that the infant vomited during the descent. The pair were given medical attention when they landed.

There were no other reports of injuries or major discomfort, Scoot said. The plane has since been grounded for investigations.

Meanwhile, spare parts have been flown to Taipei for the maintenance of the aircraft. Additional tests will also be carried out to ensure that it is safe to fly before it returns to service, Scoot said.

The airline added that it will continue to cooperate with the relevant authorities in Singapore and Taiwan on investigations.