Leslie Heng wins people's choice award in contest, thanks to tips from a foreign friend

It was a foreigner who helped paint him a new picture of his home.

Three years ago, then budding photographer Leslie Heng went out on a day shoot with Mr Nuno Assis, a Portuguese photographer based in Macau, who was visiting Singapore. Mr Heng had intended to show his friend the best that the country had to offer, but he was in for a surprise.

"It was the other way round. He showed me a lot of different angles (and places) we could take pictures, and that changed my perspective entirely," said Mr Heng, 42, who works in plastic manufacturing.

He was speaking to The Straits Times at the #WhatMakesSG media launch and photo exhibition yesterday at Suntec City, where he was named the People's Choice Award winner of the photography competition for his shot of Gardens by the Bay. "When I went to different places, even if it was the same old HDB block that I'd always been going to, I started to look up. I started to look left. And then I started to see interesting angles," he said.

The competition held in April is part of the #WhatMakesSG collaboration between National Geographic and the Ministry of Communications and Information (MCI) in celebration of National Day. Over 7,000 entries were submitted.

Ms Kang Yen Thiing won the grand prize for her photo of an otter family at Gardens by the Bay East. 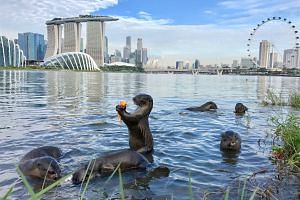 Home is an otter delight for prize winner

Ms Sim Ann, Senior Minister of State for Communications and Information, as well as Culture, Community and Youth, said: "As we celebrate each National Day, we think of different ways to celebrate Singapore's history, and of telling the Singapore story."