SINGAPORE - Filipino maid Arlyn Picar Nucos, who died in Sunday's (Dec 29) Lucky Plaza accident, was a friend and a mentor to Ms Fe Alumbro, her co-worker in the same household.

But now, the only way Ms Alumbro, 44, can pay her back is to help pack Ms Nucos' belongings and send them to her family in the Philippines.

Ms Nucos, 50, who had worked in Singapore for almost 30 years, was one of the six Filipino maids who were hit by a car while having a picnic outside Lucky Plaza on Sunday.

"She taught me everything, how to cook, how to look after the kids," said a tearful Ms Alumbro at Ms Nucos' wake at Sin Ming Drive on New Year's Day.

Ms Alumbro's last memory of Ms Nucos was the latter preparing food for the picnic on the day of the fateful accident, as Ms Alumbro left the house to go out.

"Now when I go home and she's not there, I feel very sad. It's just me left," she said.

A similar sense of loss could be felt at Geylang Bahru, where the wake of the second accident victim, Ms Abigail Danao Leste, 41, was being held.

Ms Leste's daughter, Jackie Lyne Leste, 21, was unable to fly to Singapore at the time to pay her respects to her mother in person and had to view her mother's casket over a video call with Ms Leste's cousin, who gave her name only as Ronalyn.

Ronalyn later broke down sobbing and had to be consoled by fellow mourners. She declined to speak with the media.

Ms Leste's body is expected to be flown back to the Philippines on Thursday, while Ms Nucos' body will return home on Wednesday evening.

One of the six accident victims, Laila Flores Laudencia, 44, was present at both of her friends' wakes.

The distraught domestic helper declined to be interviewed. She had a large bandage over one leg, and appeared to need help walking. 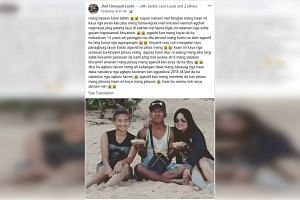 Lucky Plaza accident: Maids in accident will be covered by insurance

Lucky Plaza accident: MOH explains why victims were not taken to Mt Elizabeth Hospital, just 200m from the scene

The pair had known each other for 17 years and came from the same province, La Union, in the Philippines.

Ms Camat recalled chatting with Ms Nucos daily when the two worked for neighbouring households in the Siglap area.

"She was a person who, even if she didn't have anything, would still help others... a generous, happy person," said Ms Camat.

They would typically hang out together every holiday but on the day of the accident, Ms Camat had decided to go to a different gathering from the one that Ms Nucos had attended.

She did not find out about the accident until someone told her about it over the phone.

"I couldn't believe all this happened. I couldn't even cry. You just lose a good friend, just like that, it was very shocking," said Ms Camat, choking up.

Another helper who would typically meet Ms Nucos at the spot of the accident was Ms Jobita Delmendo, 52.

She said that Ms Nucos was very friendly, and would bring her food every Sunday when they met up.

"She was more than a sister to me. Her favourite colour was yellow," she recalled, before tearing up.

She continued: "We'd always meet at this place (outside Lucky Plaza), no need to SMS or call beforehand. But I won't be going there anymore. I'm too traumatised."

It was not just friends who showed up at Ms Nucos' wake.

Aside from her employers, who declined to be interviewed, members of the Filipino community, such as domestic helper Lory Galura, 44, came to provide emotional and financial support to the grieving friends and relatives.

As of 4.45pm on Wednesday, more than $253,000 had been raised in support of the six accident victims on fund-raising website Giving.sg.

Ms Galura said she was trying to find a way to give money directly to Ms Nucos' family.

"For Filipinos, it's our tradition. Even if we don't have much, we give what we can. We all work here in Singapore, which is not our country, so we treat each other as family. If anything goes wrong, we help each other," she said.

Mr Bernard Menon, who oversees the Migrant Worker's Centre at NTUC and was present at Ms Nucos' wake, said of her: "I think the record speaks for itself. Arlyn would probably have been as close to a model domestic worker as you could find."