SINGAPORE - A shared-kitchen operator has appealed to the Competition and Consumer Commission of Singapore (CCCS) to "help level the playing field" after being shut out by a second food delivery operator just weeks after starting business.

Smart City Kitchens' general manager Warren Tseng said at a press conference on Wednesday (July 17) that Deliveroo and GrabFood - which it estimates to represent about 60 per cent of the online food delivery market here - have refused to list restaurants operating out of its Tampines kitchen on their platform.

The 13,000 sq ft facility opened last month and houses 30 individual kitchens that are rented out to food and beverage operators for delivery operations.

Smart City Kitchens, which touts itself as the first operator here that is not affiliated with a delivery service, offers advisory and facility services, but restaurants must find their own platforms for sale and delivery.

The CCCS said in response to queries that it is "looking into the matter", but is unable to provide further details at this stage.

Some eateries operating out of Smart City Kitchens told The Straits Times last week that food delivery giant Deliveroo had refused to list them on its platform, putting a dent in their expansion plans.

The reason they were given was that Deliveroo had decided not to work with Smart City Kitchens.

GrabFood has since followed suit, they said on Wednesday.

In addition to providing delivery services for restaurant partners, Deliveroo operates three shared kitchens of its own. GrabFood said earlier this year that it planned to venture into the space as well. 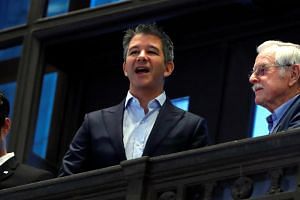 Foodpanda, which has two shared kitchens in Singapore where its couriers deliver from a variety of brands, has continued to partner with those operating out of Smart City Kitchens.

Grab said in response to queries that it is "finding the most efficient way to adopt the cloud kitchen concept onto our platform, whether with partners or on our own".

"We have spoken to merchants who have reached out to us and have explained that we are unable to serve them at present. However, we will explore other ways to support them on our platform in future," a spokesman said.

Deliveroo said last week that it is "evaluating what is in the best interests of our restaurant partners and customers".

Mr Tseng said the moves by Deliveroo and GrabFood "go against the spirit of fair play and healthy competition".

"This has severely affected at least seven tenants who had already started operations, and is deeply concerning to over 20 others who are due to commence operations over the coming weeks," he said.

Smart City Kitchens, which is affiliated with former Uber chief executive Travis Kalanick, is going ahead with plans to open three more kitchens in Singapore by year end and to expand across South-east Asia, said Mr Tseng.

He added that there are no ongoing discussions with either Deliveroo or Grab, and that the firm is exploring working with smaller players.

Associate Professor Lawrence Loh of the NUS Business School said food delivery services have the prerogative to choose their suppliers.

"If the major food delivery services are ignoring the shared kitchens, other market takers will spring up to fill the gap," he said.

"If there are legitimate reasons, such as price negotiations falling through... then of course a delivery company can refuse to do business with a provider."

"If it is done just to keep a competitor out, the action might well find some response from the Competition and Consumer Commission of Singapore," he said.