Delivery firm says it is in talks with the kitchen, which is not tied to any platform

Diners ordering in have enjoyed more options as shared kitchens spread across Singapore over the last two years.

Operated by food delivery services, the kitchens helped restaurants circumvent the high rental and manpower costs associated with dine-in establishments, and led to the creation of delivery-only brands.

Now, some eateries operating out of an independent kitchen in Tampines say food delivery giant Deliveroo has refused to list their brands on its platform, putting a dent in their expansion plans.

Smart City Kitchens, which opened its first shared kitchen at the JTC Space in Tampines North last month, is believed to be the only operator here that is not affiliated with a delivery firm.

Restaurants that rent kitchen space must find their own means of sale and delivery, such as by partnering with food delivery services.

Mr Shubham Gupta, co-founder of Biryani Box, told The Straits Times that he closed his dum briyani stall at Alexandra Village six months ago with plans to expand as a delivery-only eatery.

He said he considered joining one of Deliveroo's three shared kitchens, but when told that they were full, he decided to rent from Smart City Kitchens instead.

Biryani Box, which will begin operations next week, will be listed on other delivery apps.

Restaurant and food delivery is very cut-throat, so being shut out of a percentage of the market would really make it a challenge.

"Deliveroo was initially working with us to set up, but when I called them, they said they will be pausing because they are not working with Smart City Kitchens," said Mr Gupta.

"It was shocking. Going into delivery-only, they are a key part of our entire business model. Restaurant and food delivery is very cut-throat, so being shut out of a percentage of the market would really make it a challenge," he added.

Deliveroo launched its first Deliveroo Editions kitchen in Katong in 2017, and now has two others at Lavender and Mediapolis, which also feature dine-in areas.

Foodpanda has two shared kitchens in Singapore, while GrabFood earlier this year announced plans to open its own kitchens. 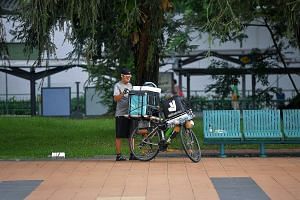 Ms Harsha Raja, sales and marketing manager for the Raj Group of Restaurants, which has four outlets listed on Deliveroo, said she found out just days before the launch of the Smart City Kitchens outlet that it would not be added to the platform.

"There was no clear explanation as to why. The only thing I can think of is that they have Deliveroo Editions, but it doesn't seem like it would be a conflict because Smart City doesn't offer any delivery services. At the end of the day, the delivery services are still getting the commissions," she said.

The latest outlet, which began operations two weeks ago, has been making deliveries through Foodpanda and is in the process of listing with GrabFood.

Smart City Kitchens said in a statement that it believes restaurants should be free to choose where they open their outlets and which online food delivery platforms to use.

It declined to comment on how many tenants it has and whether it has filed a complaint with the Competition and Consumer Commission of Singapore (CCCS).

Restaurants renting from Smart City Kitchens said Deliveroo is the only delivery service that has refused to list them on its platform.

In response to queries, Deliveroo said that it is in discussions with Smart City Kitchens and "evaluating what is in the best interests of our restaurant partners and customers".

The CCCS said it could not comment on the situation as it needs to "examine the specific facts and circumstances of the case in detail in order to determine if the conduct is anti-competitive".

Businesses with a dominant market position can risk infringing competition law if they engage in exclusionary conduct such as tying, bundling or exclusive agreements that can prevent their competitors from competing effectively or shutting them out of the market, it added.

Foodpanda said that while Smart City Kitchens may be in the same market, "we feel that they have a unique approach to helping grow shared kitchens across Singapore and the Asia-Pacific, and we can both learn from them and partner with them to find additional ways to acquire new customers and help our vendors succeed".

Ms Fiona Cher-Harman, managing director of Leaf Chief, said she chose Smart City's shared kitchen to launch her delivery-only dumpling brand as it does not restrict her to working with just one delivery provider. The brand will launch in September.

"We'll see how this plays out. If we need to, we'll come up with our own delivery options, whether we take the process in-house or tap smaller players in the market," she said.