SINGAPORE - The Singapore Civil Defence Force (SCDF) on Thursday (May 24) said it is investigating two videos showing what appears to be a 2017 ragging incident, in which an SCDF personnel is seen being dragged along the floor and struggling in a water-filled well.

The existence of the videos were first reported by news site Channel NewsAsia (CNA) on Thursday afternoon, less than two weeks after Corporal Kok Yuen Chin, 22, a SCDF full-time national serviceman (NSF), died after being thrown inside a pump well at Tuas View Fire Station.

CNA said the clips had been provided by a member of the public who did not want to be named. The person who submitted the videos claimed that they were taken between January and February 2017 at the old Jurong Fire Station. CNA posted screenshots of the video showing a uniformed personnel being pulled on the floor despite his protestations, before he was seen in a well hanging on to the side.

Yesterday, SCDF reiterated it " will not tolerate any ragging or unauthorised initiation activities".

Cpl Kok had entered a 12m-deep pump well as part of a stunt to celebrate the end of his conscription. The Malaysian national and Singapore permanent resident was later found unconscious in the pump well. A Board of Inquiry (BOI) has been convened to look into the incident. Two SCDF regular personnel have been arrested in relation to his death and will also be suspended from service on half-pay pending the outcome of police investigations. The duo - a Warrant Officer 1 and a Staff Sergeant - were Cpl Kok's colleagues who worked in the same shift duty at the station.

Home Affairs Minister K. Shanmugam later said that the SCDF and Home Team agencies will see what went wrong, and learn the lessons, looking into what more can be done to stop this behaviour.

Since the incident, the SCDF implemented new measures including the installation of a metal grating across the openings of fire-station pump wells to prevent unauthorised access, and the expansion of closed-circuit television (CCTV) camera coverage at SCDF premises to deter and detect unauthorised activities. There will also be stiffer penalties for officers if they are found guilty of participating in any ragging or unauthorised initiation activities. 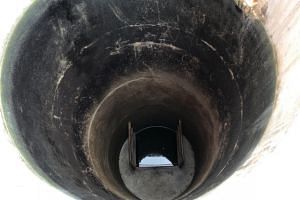 Referring to Cpl Kok's case, Mr Shanmugam said: "What I can say is that the conduct was unacceptable. It was a clear and serious violation of the rules, and there can be no excuse for the conduct."