The strong do what they can and the weak suffer what they must.

This was the grim pronouncement by the ancient Greek city of Athens, as it violently laid siege to the small but prosperous island of Melos in 416BC, said Chief Justice Sundaresh Menon yesterday.

Melos had refused to pay tribute to Athens, choosing to remain neutral. It paid a heavy price.

Instead of leaving Melos after it surrendered, the Athenians continued to execute and enslave its people, he noted.

Chief Justice Menon used this historical event to illustrate how far the world has progressed from the use of brute force in ancient times to modern reason and justice.

But he cautioned that today's stability cannot be taken for granted. For small states like Singapore, the international rule of law is an existential necessity, he said.

"Our future lies not in the naive tactic of tethering our fate to whoever we think is the strongest power, for that will mean reducing ourselves to the status of a vassal."

The Chief Justice was delivering the 11th S. Rajaratnam Lecture, an annual platform organised by Singapore's Ministry of Foreign Affairs for distinguished public figures to speak on topics related to diplomacy and international relations.

Speaking to 850 government officials, students and academics at Raffles City Convention Centre, he said there has been a gradual decay of the international order that emerged after World War II, and that the rule of law can be easily subordinated to domestic politics. 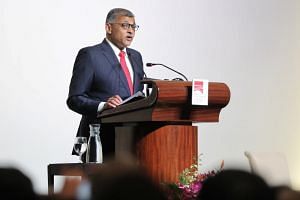 "Countries increasingly adopt a zero-sum mentality in eschewing multilateral agreements as shackles on sovereignty and a burden on economic growth."

Elaborating, he said Singapore must maintain its relevance as a centre for trade and finance by having a successful and vibrant economy that is backed by a strong and respected defence force. It should also actively contribute to multilateral groups such as Asean, the Forum of Small States, and the Global Governance Group, as these provide a broader stage to advocate its interests and influence regional politics.

Citing Singapore's contributions to the UN Convention on the Law of the Sea in 1982, the Paris Agreement on climate change in 2015 and the recently-inked Singapore Convention on Mediation, he described how it promotes an international legal order that respects reason rather than force.

It must also remain an honest broker that cannot be "bought or bullied", he added. This involves being principled, adhering to international obligations, and insisting that agreements entered into in good faith are honoured by others.

Returning to the case of Melos, Chief Justice Menon said history shows that what goes around, comes around.

Merely a decade after the siege of Melos, Athens was defeated by Sparta, but it was 10 years too late for the unfortunate inhabitants of Melos. "The moral of Melos is not bravery in the face of overwhelming odds, but the need to remain deeply conscious of geopolitical realities," he added.

It is law alone that provides assurance, predictability and order, especially since countries are now increasingly interdependent and have the technological ability to inflict destruction on a large scale.

The alternative, he added, is a descent into anarchy that dooms not only small states, but also much of humanity.

"But when we find ourselves at the receiving end of such bullying, we should pull all the levers of our foreign policy strategy and remain confident that in today's world, no power can bully all of us, all the time," he said.

From Nazi war crimes to territorial disputes: How international law is applied

These were a series of trials carried out in Nuremberg, Germany, in the 1940s, to bring Nazi war criminals to justice.

Judges from the Allied powers - Great Britain, France, the Soviet Union and the United States - presided over a military tribunal. Of the 24 prominent Nazis who were indicted, 12 were sentenced to death.

The trials are considered a milestone in international law. It rejected the notion, widely accepted until then, that individuals could not be put on trial for acts committed by states. This paved the way to indict individuals such as Slobodan Milosevic of Yugoslavia and Augusto Pinochet of Chile.

In February, the United Nations' highest court, the International Court of Justice (ICJ), held that UK should end its control of the Chagos Islands in the Indian Ocean.

Mauritius claimed it was forced to give up the islands - a British overseas territory - in 1965 in exchange for independence, which it gained in 1968.

The ICJ decided it was in a position to provide an advisory opinion even though opinion on bilateral disputes can be issued only with the consent of both parties, which the United Kingdom had not given. It sidestepped the problem by framing the issue as a broader one relating to decolonisation than one of territorial dispute.

The General Assembly welcomed the ICJ's opinion, saying respect for the court and its functions is essential to an international order based on the rule of law.

Investor-state dispute settlement (ISDS), which allows foreign investors to bring claims directly against the host state, tends to be less cumbersome and more cost-effective than conventional state-to-state dispute resolution. It can prevent more powerful states from favouring their nationals through diplomatic or military interventions in weaker host states.

ISDS has faced increasing political pushback in recent years, due to concerns that tribunals used in arbitration may impinge on state sovereignty.

But Singapore has participated actively in the international dialogue to develop a fair, workable and cost-effective ISDS framework, said Chief Justice Sundaresh Menon.

New ideas include establishing an appeals body, and a permanent investment court to improve decisions and guarantee the independence of adjudicators.

International law can also be enforced through sanctions that interrupt trade flows or sever diplomatic relations.

Examples include the nearly 20-year financial and trade embargo imposed on Iraq following its invasion of Kuwait in 1990, and embargoes on North Korea because of its nuclear pursuits.

While their effectiveness is debatable, sanctions signal the international community's condemnation of norm violations and its willingness to act powerfully, but peacefully, to maintain the international rule of law.

This is a process by which countries review whether other states have complied with international law. The best-known example is the UN Human Rights Council's Universal Periodic Review (UPR), where countries submit reports of actions they have taken to improve their human rights situation.

Another example is the Montreal Protocol on Substances that Deplete the Ozone Layer, which is ratified by 197 states.

A state's reasons for non-compliance are placed before a meeting of other states, which then decide how to assist it.

It encourages compliance through the "mobilisation of shame", rather than confrontation and formal dispute settlement.