SINGAPORE - A police report has been filed after a group of teens posted a video of themselves performing parkour stunts on the roof of a 40-storey Housing Board block in Clementi.

The 2½-minute video, which was posted on social media platforms on June 23, showed at least three teens climbing onto the roof to perform stunts including jumping across gaps in the roof.

They also filmed themselves climbing up vertical ladders on the roof and scaling the sides of the block.

According to checks by Chinese newspaper Lianhe Wanbao, the stunts were performed at one of the blocks from 312A to 312C in Clementi Avenue 4.

When a reporter visited the estate, staircases to the rooftop were found locked. Signs were also displayed, stating only authorised staff are allowed to enter.

When contacted, a spokesman for the Holland-Bukit Panjang Town Council told The Straits Times on Wednesday (July 4) that it has filed a police report.

The spokesman added that the video appears to have been filmed at least a year ago, before residents started moving into the estate in September 2016.

"We believe that the video was taken some time back, in the period whereby the building was still in construction and before residents moved in," said the spokesman. 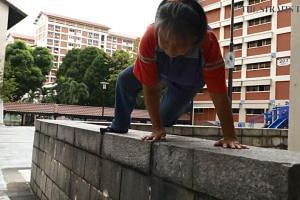 Last year, a group of young parkour enthusiasts found themselves in trouble after they scaled the glass dome roof of Eastpoint Mall in Simei and walked on top of railings on a Pan-Island Expressway flyover. A police report was also filed against the youths by the East Coast-Fengshan Town Council.

In March this year, a spokesman for the police said they gave a stern warning to a 23-year-old man and a conditional warning to a 24-year-old man, following investigation and in consultation with the Attorney-General's Chambers.