SINGAPORE - The parkour enthusiast who sparked police reports last September after posting a video of himself scaling the glass roof of a mall in Simei has been let off with a warning, and has adjusted his views regarding the practice of the urban sport.

In September last year, police reports were made against a group of young people who were filmed performing various stunts, including climbing onto the glass dome roof of Eastpoint Mall and walking on top of the railings of a Pan-Island Expressway flyover.

A spokesman for the police told ST on Thursday (March 1) that they have administered a stern warning to a 23-year-old man and a conditional warning to a 24-year-old man, following investigation and in consultation with the Attorney-General's Chambers.

The 23-year-old man was on the roof with Mr Koh, while the other three men involved are not from Singapore and have left the country.

According to the Law Gazette, which is published by the Law Society, a stern warning is used in low-level criminal offences. A conditional warning is a type of stern warning that carries a stronger deterrent effect - the condition is that the suspect must remain crime-free for a period of time, usually 12 months, after its issuance.

That was the amount of time that applied in Mr Koh's conditional warning.

Mr Koh, who works as a video editor and coaches parkour on weeknights and Saturdays, told ST in September that he was remorseful for his actions.

The episode has taught him much, he said this week.

"I learnt that as much as it is fun and great for photography, climbing up and trespassing onto public property is clearly out of bounds and it is against the law in Singapore," he said. "I should know better and stick to places where it's not illegal."

Mr Koh, who first started practising parkour in 2007 after watching a French movie about the sport called Yamakasi, said the incident increased awareness among the local parkour community.

"It helped make sure our practitioners steered clear from unlawful behaviour," he said. "The community also came together to protect the sport by trying to clear up the public's misconceptions of parkour and how it is not connected to rooftopping or trespassing."

"I am extremely glad that it was well-received," said Mr Koh. "Even Prime Minister Lee Hsien Loong shared it!"

Meanwhile, the local parkour scene is growing, with the number of people joining monthly parkour gatherings increasing from about 20 to 50, and more classes available. 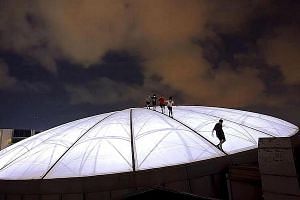 The group organised a Family Parkour Workshop on Feb 25 where it taught the young and old  parkour basics.

Coaches from local academies ran children through the basics of parkour, while the coach that taught ST's "parkour aunties", Move Academy Singapore's Tan Shie Boon, guided their parents and the elderly in fall prevention and management techniques.

Mr Koh has no plans to give up the sport. In fact, he is gearing up for the fourth edition of an annual international parkour gathering run by Parkour Singapore.

The Lion City Gathering IV, which takes place from June 22 to 24, is said to be the biggest parkour event in Asia.

Mr Koh hopes to put the Eastpoint incident behind him and turn the image of parkour around.

He wrote in a public Facebook post on Sunday that he "was not exemplary" in his actions "as a leading figure of Parkour Singapore".

"Trespassing is a crime and we do not condone it. This was a mistake on my part and I really hope that the impression of parkour practitioners are brats that trespass and climb on roofs will end," he said.

"Parkour and rooftopping are not related. My sincere apologies to the mall management and the relevant parties and friends who were unnecessarily involved in the entire investigation process."

He added that he was excited to see what was in store for the sport in Singapore, and hopes to strive for greater achievements for the local community.