SINGAPORE - Minors will receive more protection against sexual predators, with new categories of sex offences and harsher punishment for sexual crimes involving those below 18, under the proposals from the Penal Code review committee.

A key proposal among the series of suggested amendments will protect minors aged between 16 and 18 from being exploited for sex. Currently, there are no provisions for penetrative sexual activity arising from an exploitative or manipulative relationship for those in this age range.

The age of consent for sexual activity in Singapore is 16, which the committee recommended to retain. However, it suggested a new offence to cover exploitative penetrative sexual activity with minors aged between 16 and 18, as the nature of an exploitative or manipulative relationship could affect the quality of consent.

Under this provision, offenders who commit the act of sexual penetration of the minor in the context of an exploitative relationship could face a maximum of 20 years' jail and a possible fine and caning, if the victim is below 18. If the victim is below 14, it would be a mandatory eight years' jail, which could extend to 20 years, and a minimum 12 strokes of the cane and a possible fine.

The committee also made suggestions to tackle the commercial exploitation of minors. Among the points raised was to use the term "child abuse material" instead of "child pornography" to accurately reflect the nature of the material and its harms. The term would cover not just sexual abuse, but physical abuse as well.

There are currently no specific provisions regarding child pornography, and a patchwork of existing laws, such as those under the Films Act, are used to tackle these cases.

"Technology has not just facilitated the distribution of child pornography, but the demand for it as well," said the committee. "The current law was not designed for, and is inadequate to address, the serious problems that the rise of the Internet has created for offences such as child pornography."

Punishments under the provisions for child abuse material will range from five to 10 years' mandatory jail, with a possible fine and caning, depending on the offender's involvement in the creation or handling of the material. 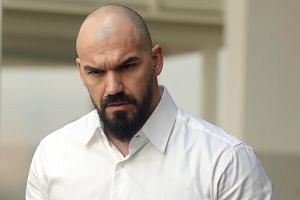 The committee also proposed that fictional child abuse material be covered, as they can be used for grooming children and can reinforce abusers' inappropriate feelings. However, it recognised that since such fictional material does not involve actual children, lower punishments could be prescribed.

With the proposed amendments, the instances of prior contact is lowered to just one, and it will cover the scenario where the victim travels to meet the offender.

Another new offence is to criminalise sexual communication with minors, even if the minor does not respond. Currently, there are no specific legal responses available where an offender sexually communicates with no intention of meeting or trying to meet the victim.

The committee said this proposed offence will apply only to adult offenders and communication must be sexual in nature.

It proposed that the prescribed punishment range from a maximum of two to three years' jail, with a possible fine, depending on the age of the minor involved.

To protect minors under 18 from being shown sexual images by an adult, the committee proposed to make it an offence to engage in sexual activity in front of the minor or cause the minor to look at a sexual image. Currently, there are no specific provisions that deal with these aspects.

The committee said recommendations in this section aimed to deal with the entire spectrum of predatory behaviour by adult offenders who seek to groom and manipulate minors for their own sexual gratification.

"It is hoped that these recommendations will enable authorities to intervene and punish offenders early, before more serious sexual offences are committed, and greater harm caused to the victims," it said.

Last year, Robinson, a mixed martial arts instructor, was sentenced to four years' jail for a range of offences from sexual penetration of two 15-year-olds to showing an obscene film to a six-year-old girl. Investigators also found 5,902 obscene films in his apartment, the largest stash found on an individual.

"Young children being exposed to unacceptable material, being sexually groomed. We want to deal very severely with that."

The number of alleged cases of child sexual abuse has also been on the rise. Recent statistics show that the Ministry of Social and Family Development's Child Protective Service investigated 181 allegations of sexual abuse involving children under 16 last year.

Lawyers and those who work with children welcomed the proposed amendments, saying the changes were timely and somewhat overdue.

Lawyer Amolat Singh said the amendments are very offence-specific and paternalistic. "The elements and ingredients are set out (for the specific offence) and everyone will know if the line has been crossed or not. It makes for certainty and clarity," he said.

Lead social worker at the Big Love Child Protection Services Centre, Ms Serene Tan, said the prevalence of smartphones and the liberal use of social media among minors has made it easier for predatory offenders to reach out to minors and sexually groom them.

While she welcomed the proposed changes, Ms Tan said protecting minors was not solely the job of the authorities or the law, but also the responsibility of others such as teachers, doctors and parents.

"Once it is reported, the amended and new laws can then bring about the needed sanctions towards those who committed such grave acts towards our minors," she said.

Family therapist Evonne Lek said the proposed changes showed a stricter stance on child sexual abuse and exploitation, but she expressed concern that the tightening of the law might prevent offenders or potential offenders from seeking help.

"I hope this will create a gateway for people to be flagged earlier so that they can receive treatment and therapy," she said.