SINGAPORE - This year's Christmas light-up on Orchard Road will go for a more traditional feel, following criticism that last year's Disney-themed decorations had drawn focus away from the holiday's meaning.

Santa Claus will be the mascot and will be featured heavily on the glittering archways and adornments lining the street, the Orchard Road Business Association (Orba) announced at a press conference on Wednesday (Sept 25).

Themed "The Greatest Gift", the decorations will include other Christmas staples such as Christmas trees and presents.

This year's light-up, which will run from Nov 16 to Jan 1 next year, will also be more extensive, with street decorations extending to Grange Road and Orchard Link for the first time. The Great Christmas Village, held at Ngee Ann City Civic Plaza over the past two years, will spread across three locations and feature more rides and food vendors.

Orba chairman Mark Shaw told reporters at the Mandarin Orchard Hotel that the direction of this year's theme was not influenced by the feedback last year.

He pointed to the fact that the first branded light-up in the event's 35-year history was the result of a three-year collaboration between the Walt Disney Company South-east Asia and the Singapore Tourism Board (STB) to bring themed events and activities to Singapore.

"We've always tried to do the Christmas message generally and it may have got slightly lost last year. I thought it was still there, but it's just maybe how it was interpreted," said Mr Shaw.

Last year, Disney characters such as Snow White and Cinderella took centre stage in the decorations and this was criticised by the National Council of Churches of Singapore which said the Christian festival's original meaning had been buried under a "extensive and sophisticated brand promotion exercise".

But there were also those who did not object to the Disney theme, saying that it was compatible with the shopping season and held broad appeal. 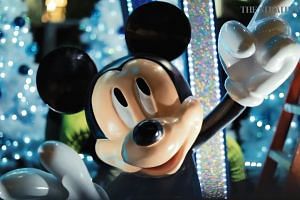 Too much emphasis on Disney in Orchard Road Christmas light-up, says Dick Lee

This year, bigger and grander lamp post decorations will line the Tanglin, Orchard and Somerset sub-precincts, which will each have a unique theme, Orba said. Including the extended area, a total of 3.9km will be lit up by more than 6km of stringed lights and almost 200 Christmas tree-shaped LED decorations. Santa and his reindeer will provide photo opportunities on street pavements while Christmas carols fill the air.

The Great Christmas Village will run from Nov 23 to Dec 26 at *Scape, the Grange Road open-air carpark and Shaw House Urban Plaza. It will feature more than 30 amusement rides and game booths, as well as food trucks, musical performances and other activities.

Mr Shaw said that the decision to extend the area of the light-up was tied to the success of last year's village festivities. Spreading it across three venues will allow visitors to explore more of the street, including the expanded light-up zones, he said.

Orba began a year-long trial in April to bring activities such as pop-ups and events to pedestrian walkways as part of earlier announced plans to rejuvenate Orchard Road.

In May, it kicked off a monthly night-time event called Night at Orchard, which features fashion, food and musical performances by buskers. While about 50 local brands were part of the first edition, there are now about 80 on a rotating basis.

Referring to venues such as the Grange Road carpark, Mr Goh said: "In the past, if you wanted to use state land for activities, there was a lot of hesitation because the application process was very complicated. Now with Orba's involvement, it's easier for brands who want to launch new products or have activities on Orchard Road."