SINGAPORE - Singer-songwriter and Cultural Medallion recipient Dick Lee has joined in the discussion on this year's Orchard Road Christmas light-up, saying its Christmas elements are "too insignificant to be noticed".

Mr Lee, 62, who was involved in the light-up on at least four occasions, said: "Perhaps there is too much emphasis on Disney, and too little on Christmas."

The light-up, organised by the Orchard Road Business Association (Orba), has been criticised for its strong focus on Disney characters. This Disney theme is part of a three-year collaboration between Disney and the Singapore Tourism Board (STB).

Mr Lee, who is Catholic, told The Straits Times that every time he designed the concept for the lights, he strived to convey the elements of festivity while retaining a Christmas feeling.

"Christmas comes with many identifiable icons, such as gift boxes or the nutcracker, and they should be used in all their glory. I don't see the point of trying to change or alter those symbols too much as that might remove the seasonal elements," he said on Thursday (Nov 29).

The 2015 light-up, designed by him and designer Yang De Rong, for example, featured special structures such as a 4m-high gift box, Christmas trees and mini arches at various points along the street.

The only brand he had ever worked with for the light-up was Hitachi, Mr Lee said.

"As the main sponsor, they required their branding to be artistically worked into the design," he said. "This was done mainly on the lampposts and never within the lights across the street or the tree decorations."

The National Council of Churches (NCCS) sent a letter to STB, dated Nov 19, expressing its concern that this year's light-up, with its exclusive focus on Disney characters, has no meaningful connection to the season of Christmas.

They also agreed to schedule a meeting early next year for further discussion, the spokesman added.

When approached, STB and Orba said they did not have further comments on the issue.

Visitors who were unhappy with the Christmas lights have commented that the light-up pales in comparison to other festive lights.

Retiree Julia D'Silva, 66, said: "Our Hari Raya Puasa, Deepavali and Chinese New Year decorations are usually so beautiful. I hope we can also fashion Christmas decorations that better resonate with the Christmas season and its spirit of love and giving."

However, there were people who liked the Christmas light-up, such as Chinese tourist Andy Zheng, 44.

He said: "This year's decorations have combined the idea of Christmas and Disney well. There is no point in having just Christmas trees and lights every year. We need fresh concepts." 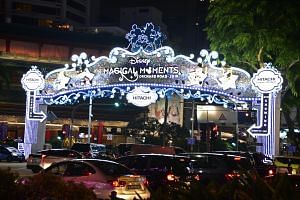 Orchard Road light-up: Is it Christmas or Disneyland?

Mr Philemon Loh, 49, head of marketing and publicity for the Chinatown Festivals Organising Committee, said the committee generally does not work with commercial brands that do not have offerings aligned with the origins and traditions of the festivals.

It has organised festive decorations for Chinese New Year and Mid-Autumn Festival for 16 years and 17 years respectively.

It worked with Disney once for the 2008 Year of the Rat celebrations, when Mickey and Minnie Mouse carried the Chinese character for "prosperity", among other decorations. But this received flak from some people.

Mr Loh said: "Market survey results from that year showed that Singaporeans are still quite traditional at heart. They appreciate creative festivals but expect no compromise on the core meaning behind them.

"This is why the committee refers to past year's market survey results to see how they can better improve on the festive decorations of each year, to cater to the public's ever-changing interests."

For the Mid-Autumn Festival, Mr Loh shared, the main decorative elements are traditional Chinese lanterns. The only variable is the type and design of the lanterns, and the centrepieces.

For Chinese New Year, the main icons vary according to the zodiac year. For example, next year will be the Year of the Pig, and the main streets in Chinatown will be adorned with a piglet-themed light-up, he said.