SINGAPORE - Criminal lawyers have said the recent decision by the police to give a young man who filmed a female undergraduate in the shower a conditional warning appears unusual, given that perpetrators in previous cases had been charged.

But they also stressed that there are mitigating factors the Singapore authorities take into account and do not need to make public.

The lawyers interviewed on Monday (April 22) were commenting on a case of sexual voyeurism at the National University of Singapore (NUS), in which the punishment given to the perpetrator had been criticised.

NUS had suspended the undergraduate for one semester, banned him from entering Eusoff Hall and had him write an apology letter to Ms Monica Baey, whom he had filmed in a shower at student residence Eusoff Hall last November.

Late last week, Ms Baey, a third-year NUS communications and new media undergraduate, expressed her frustration at what happened on her Instagram account, saying the university should have done more.

Last Saturday, NUS confirmed the case was investigated by the police and the man was given a 12-month conditional warning by the authorities. 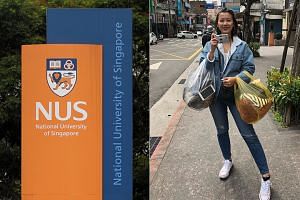 NUS' policy on sexual misconduct cases: 'Second strike and you are out'

This means he must remain crime-free for a year or may be dealt with in court for both his older and new offence. A conditional stern warning, however, will not show up on a person's records, and there is no need to declare it to private employers in general unless required to.

The criminal lawyers noted that it is uncommon for even a first-time offender to be let off with just a conditional warning for a sexual voyeurism offence, which would come under the Penal Code's Section 509, which criminalises words or gestures intended to "insult the modesty" of women.

Mr Josephus Tan, founder of Invictus Law Corporation, said: "A first-time offender for Section 509 Penal Code offence should generally be looking at a sentence of two to four weeks in jail per charge. This NUS case seems unusual as he was let off with a conditional stern warning without going through the judicial process at the first instance.

"Ultimately, the sentence imposed by courts varies from a fine to jail term to probation, but in the last few years jail has been the norm for such cases."

Mr Tan added: "Regardless of the sentence to be imposed, it would be appropriate for the offender in this case to be dealt with by our courts and a conditional stern warning could then be contemplated by the prosecution thereafter based on mitigating factors.

"A conditional stern warning is seen as a slap on the wrist in our criminal justice system."

Ms Diana Ngiam, associate director of Quahe Woo & Palmer LLC, noted that in recent times, even first-time offenders are usually charged for similar acts of filming upskirt videos. "However, it could be a combination of factors that worked in this man's favour although we do not know what these factors are."

The lawyers pointed out the Attorney-General's Chambers has full discretion to decide who to charge and what to charge the person with.

Lawyer Eugene Thuraisingam said: "They do not have to provide an explanation for their decision. Unlike other jurisdictions, they do not publish guidelines as to how they exercise their discretion. Their decision can only be challenged in Court if it is exercised with malice or in bad faith.

"It is therefore difficult to say why the offender was not charged in Court for this case. Age, potential to do well, remorse and contributions to society may certainly have been relevant factors."

Since Saturday, two online petitions have gathered the signatures of almost 44,000 people, calling for the NUS and police to take tougher action against the perpetrator.

Ms Ngiam said: "A lot of people are saying there are double standards. But we should not be too quick to criticise the police for its decision; there could be more to it than we know."

Mr Tan said that some standard mitigating factors include the offender's age and whether he has a clean record. "Other factors are his propensity to re-offend, whether he demonstrates genuine remorse and what steps he is taking to make sure he doesn't re-offend."

Last year, a 26-year-old NUS student was given three strokes of the cane and nine months' jail for molesting a classmate two months after he was given a conditional warning for peeping at a hall mate in the shower.

In 2016, a 24-year-old male student at Nanyang Technological University was arrested after filming a resident in the shower at a student dormitory. More than 60 videos of male students showering were found in his mobile phone.