The National University of Singapore (NUS) and the Singapore Food Agency (SFA) are conducting an investigation after five students from Prince George's Park House, a student residence, developed symptoms of gastroenteritis.

This incident, which occurred last Friday, is the second one this month. On April 4, 22 students at Ridge View Residential College, another student residence at NUS, came down with similar symptoms.

An NUS spokesman on Wednesday said the university conducted preliminary checks after being informed about the latest outbreak on Monday.

It found that the five students had all eaten food from a stall at the air-conditioned canteen in Prince George's Park Residence.

Some of the five students had also consumed food at off-campus dining outlets before falling ill.

University staff subsequently inspected all the stalls in the canteen on Monday and suspended the food stall, which the five students had eaten from, for one week, pending further investigation.

As a precaution, all stalls in the canteen were also instructed to close early on Monday for a thorough cleaning of the premises. 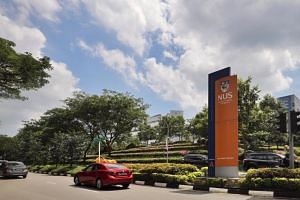 22 students from NUS residential college down with gastroenteritis symptoms, MOH and SFA investigating

The spokesman added that NUS takes a serious view of food safety and is monitoring the situation closely.

He said that regular hygiene audits are conducted for all dining facilities serving NUS' on-campus accommodations, as well as food and beverage outlets within the Kent Ridge and Bukit Timah campuses.

In addition, NUS on Wednesday initiated an independent audit of these dining areas. This is expected to be completed within a month.

A spokesman for SFA said that as of noon on Wednesday, the five affected students have recovered. None of them was hospitalised.

He added that gastroenteritis, which causes diarrhoea or vomiting, can be caused by viruses, bacteria or bacterial toxins.

People can develop gastroenteritis through eating or drinking contaminated food or having direct contact with someone who is infected. Individuals who touch contaminated surfaces and then put their unwashed hands in their mouths can also fall ill.

The SFA spokesman said it was important for people who were affected to rehydrate by drinking plenty of fluids, and to seek medical attention if necessary.