SINGAPORE - More than 20 students of a residential college at the National University of Singapore (NUS) have fallen ill after eating food from the accommodation's dining hall.

A source familiar with the situation told The Straits Times on Thursday (April 4) that the students had dined at the Ridge View Residential College on Tuesday and Wednesday.

A majority of them ate food from the Malay food counter, the source said.

There are also Western and Asian food options served at the dining hall, which is run by Chartwells.

The students reported that they had diarrhoea and had to seek medical treatment.

On Thursday, a joint statement was issued by the Ministry of Health (MOH) and the Singapore Food Agency (SFA), confirming that the authorities were investigating the gastroenteritis incident among residents of NUS Ridge View Residential College, which was established in April 2014.

Twenty-two cases were reported as of 4.30pm on Thursday.

On Friday, a NUS spokesman said that 21 of the students have since recovered and resumed classes.  A student who was hospitalised after having diarrhoea and vomiting is being closely monitored and is in stable condition.

The authorities conducted an inspection at the residential college canteen on Thursday.

In response to queries, the spokesman said that the NUS Office of Housing Services was informed of the incident on Tuesday.

The external dining operator, Chartwells, was immediately alerted and an investigation is being conducted, NUS said.

The kitchens at the college have been closed as a precautionary measure and cleaning and disinfection protocols have been carried out.

Food samples have been sent for testing and the dining operator's kitchen staff at the college have also been sent for medical checks, NUS added.

Meals at the college are being prepared by another kitchen on campus for the time being. 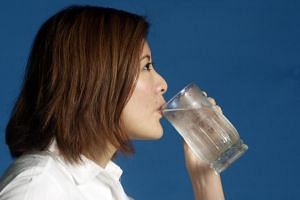 In its statement, the university said it takes a serious view of the incident.

"We will continue to closely monitor the condition of the affected students, and work closely with Chartwells and the authorities on this matter," NUS said.

In its statement, MOH and SFA said that food poisoning or foodborne illness often causes vomiting and diarrhoea which may lead to dehydration, especially in young children and the elderly.

It is important for affected people to rehydrate by drinking plenty of fluids and seek medical attention if necessary.

Chartwells is a member of Compass Group, a foodservice company.

On Friday, Chartwells confirmed that it was cooperating with NUS and the relevant authorities following the incident.

In a statement, the company said: "Whilst it is  too early to pinpoint the precise cause of the illnesses, we have taken precautionary measures including temporarily closing the kitchens while they are sanitised as per our standard operating procedures."