SINGAPORE - Even if China and the United States fail to agree on a trade deal when their leaders meet later this month, there is no need for the Chinese to panic because the damage to their economy will be bearable.

This is because the Chinese economy is not as dependent on exports as in the past, being more domestic demand-driven now than export-driven, said Professor Lawrence Lau of the Chinese University of Hong Kong.

It will likely lose 1.1 percentage points from its projected growth of 6 to 6.5 per cent this year, he said at the Inaugural John C.H. Wong Distinguished Public Lecture, organised by the National University of Singapore's East Asian Institute (EAI) and held at Sheraton Towers on Friday (March 8).

In the worst-case scenario of all exports from China to the US being halted as a result of the US imposing 25 per cent tariffs on all Chinese goods, 2.5 percentage points will be shaved from growth.

This will mean that the Chinese economy will grow at 3.5 to 4 per cent, "not a bad rate", Prof Lau said. "So there is really no need to panic... the sky is not falling."

China and the US have been engaged in a tariff war since July last year, with each side having imposed tit-for-tat tariffs of 25 per cent on US$50 billion (S$68 billion) worth of goods on the other. The US has also levied 10 per cent tariffs on US$200 billion of imports from China, and the Chinese levied the same rate on US$60 billion of goods from the US.

US President Donald Trump has threatened to raise the 10 per cent tariff rate to 25 per cent and to impose tariffs on another US$267 billion worth of Chinese imports if the two sides cannot reach a deal. 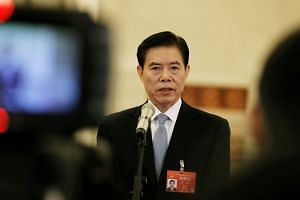 Trump and Xi close to a deal, but the trade war isn't over

The deadline for a deal was moved from the end of last year to March 1 this year as the two sides failed to reach agreement, and Mr Trump has delayed it again without giving a new deadline.

He has said that he will sign an agreement with Chinese President Xi Jinping when they meet at his Mar-a-Largo resort in Florida, and expectation is that they will meet in late March.

There is much uncertainty as to whether a deal will be sealed, and it is wise of Chinese Premier Li Keqiang to give a growth target for this year of between 6 per cent and 6.5 per cent, said Prof Lau.

"He basically signalled that growth won't be lower than 6 per cent, and that is enormously important in terms of maintaining the Chinese people's confidence," said Prof Lau.

While a trade deal this month is possible, the trade war is just the tip of the iceberg of a larger problem, which is the US fear of China overtaking it.

"All of a sudden, the Americans are discovering that China is growing too fast," said Prof Lau.

Prof Lau said the US fear of being overtaken by China has been there since the administration of President Barack Obama. Mr Obama's pivot to Asia and the Trans-Pacific Partnership trade deal were efforts to contain China.

He said, however, that the US need not fear China overtaking it because its GDP per capita, at US$60,000, is six times that of China's which is expected to reach US$10,000 last year. It will take the Chinese to the end of this century to catch up with the Americans.

Instead, the two countries should work to promote economic inter-dependence in order to restore mutual trust, he said, noting that there is a great deal of suspicion in the US about Chinese motives.

This is necessary to avoid the Thucydides trap of war between a rising power and an existing one, he said.

Apart from the lecture, a book of essays in honour of the late Prof John Wong who died in June last year, China's Economic Modernisation and Structural Changes, was also launched on Friday.

Prof Wong was professorial fellow and academic adviser, and former research director, of the EAI.

Among those who paid tribute to Prof Wong on Friday was Prof Wang Gungwu, former chairman of the EAI, who said Prof Wong had done much for the institute and that his passing left a big hole in it.