Another showed a rubbish chute with a coin-slot, labelled "insert coin to dump rubbish", next to it.

These memes have surfaced on social media following a Straits Times report on March 15 over a "pay-as-you-throw" pilot by the National Environment Agency (NEA) later this year, to make households pay according to the garbage they throw.

Besides the lighthearted memes, the report has triggered a serious debate over the feasibility of implementing such a scheme here and the necessity of exploring this idea or even others to monitor and limit rubbish dumped by households.

Speaking at a major sustainability conference in Kenya's Nairobi city on March 12, Mr Cheang Kok Chung, director of NEA's department for environmental protection policy and international relations, had revealed plans for a trial of the initiative.

He said the pilot could involve bin chutes that use radio frequency identification (RFID) technology to track how much waste a household produces.

Though the NEA has said it will not be implementing the initiative immediately, it has already drawn more criticism than praise from Singaporeans.

A poll of 100 ST readers found that 69 of them opposed the idea.

Several HDB residents told The Straits Times that they fear the plan might result in them having to pay much more for waste disposal, or in people throwing rubbish indiscriminately to avoid paying the fee.

But others think pay-as-you-throw could be a good idea, if more thought is put into how the plan might be carried out.

Madam Janice Seah, 54, an administrative assistant, is one of those who expects more harm than good to come out of the pay-as-you-throw plan.

"I think having RFID tags to track waste is okay if it's just for monitoring. But I'm afraid people will try to avoid paying and leave their rubbish next to the communal chute," said Madam Seah, who lives in an HDB flat in Sengkang.

"Our corridors will end up being smelly and attract cockroaches, rats and other pests. The waste disposal people will then have to come and pick up trash two or three times a day."

Ms Koh is concerned that garbage chutes might become "ERPs for trash bags". She hopes that the fee of $8.25 will remain as the upper limit for garbage disposal under the scheme.

"I don't want my garbage bill to become like a cellphone bill. Garbage disposal, like water and electricity, is part of our basic utilities, not like extra mobile data, and we shouldn't be charged just for throwing rubbish," Ms Koh added.

But others said there are some upsides to the pay-as-you-throw idea. 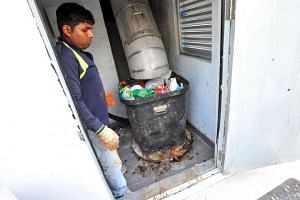 Watch: Where does all your rubbish go?

PUB, NEA find a way to convert sludge and food waste into energy

Ms Irene Tan, 41, an accountant at a construction company, said the scheme will encourage people to go green and also reduce the amount of stuff they throw away.

Ms Tan, who lives alone, said she disposes only two plastic bags of rubbish a week. She estimated that if she were charged 50 cents per chute-load, she would pay around $6 a month, instead of the $8.25 she is paying now.

"I try to recycle and being able to save some cash along the way will encourage me to re-use my items more," Ms Tan added.

Meanwhile, some people agree that the pay-as-you-throw initiative might help to reduce household waste and gave suggestions to ensure the pilot is effective.

Mr Cole Lee, 23, a second-year undergraduate, said he hopes to see some cash incentives being given out when the initiative is rolled out.

"The four members of my family live in a two-room flat and my father is the sole breadwinner," Mr Lee said.

"The little things add up, so things like monthly rebates for throwing fewer things, or even a six-month free trial for the pay-as-you-throw system, would help us out."

MPs have also weighed in about the viability of the pay-as-you-throw project.

"In the light of our only landfill filling up faster than expected, we need to reduce the amount of waste we generate," said Ms Lee Bee Wah, an MP for Nee Soon GRC, referring to the Semakau landfill which was envisaged to last till 2046 when it first opened in 1999, but is now expected to run out of space by 2035.

She added that the focus should first be on education and changing mindsets regarding waste management.

"Reducing waste should come from the heart. Otherwise, if we only focus on the fees, those who can afford the fees may not be motivated to reduce their waste significantly," Ms Lee said.

Mr Gan Thiam Poh, an MP for Ang Mo Kio GRC, said the initiative, if rolled out, may spur locals to find ways to convert and re-use their items. "The bigger concern beyond pay-as-you-throw is to keep Singapore clean and environmentally friendly, and to do our part on the world stage to help save the environment.

"Saving the planet and fighting climate change is everyone's responsibility, rich or poor," he added.