The population of dengue-carrying mosquitoes in Nee Soon East and Tampines West has been cut by at least half after the release of sterile male mosquitoes, which leads to eggs that cannot hatch. And this success will see the scheme, labelled Project Wolbachia, expanded to wider areas in the two estates.

From April last year to this month, the National Environment Agency (NEA) saw an 80 per cent fall in the Aedes mosquito population in a research area in Nee Soon East. The population was halved in the Tampines West study site, the agency said yesterday.

Still, "it is not a magic bullet" that will solve the mosquito problem, said Associate Professor Ng Lee Ching, director of the NEA's Environmental Health Institute. "It will complement what we are doing: source reduction, mozzie wipeout (campaign), and removing as many mosquitoes as possible from the community."

Dengue continues to be a perennial problem for Singapore. There were 455 cases reported in just the first two weeks of this month - triple the number reported over the same two-week period in January last year.

The first small-scale field studies in Braddell Heights, Nee Soon East and Tampines West examined the behaviour of the Wolbachia-carrying Aedes aegypti in the urban environment, such as how far and high they fly, and how well they could compete with their wild counterparts to mate with females. 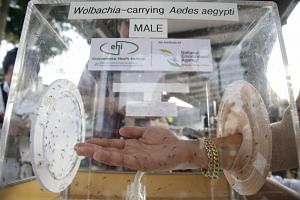 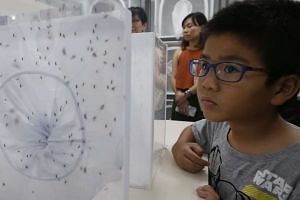 Rise in dengue cases in past month; 455 cases reported over two weeks in January

The second phase - from April last year to this month - involved a total of 76 HDB blocks comprising about 7,000 households. The agency also released the Wolbachia mosquitoes at higher floors, as only 6 per cent of the adult male Wolbachia-carrying mosquitoes released at the ground floor were later found on the ninth floor and higher.

The next phase, which will start next month, will see a doubling of the number of HDB blocks where the Wolbachia-Aedes mosquitoes are released.

"The data that has been generated through the different phases of the field study is essential in developing an effective long-term mosquito suppression programme for Singapore," said Professor Ary Hoffmann, Laureate Professor at the University of Melbourne.

He is a member of Singapore's Dengue Expert Advisory Programme, which comprises experts on vector-borne diseases from Singapore, Australia, the United Kingdom and the United States.

Decreasing the population of Aedes mosquitoes drastically might be possible in the long run, said Prof Hoffmann, who cited the example of a study in Guangzhou, where the mosquito population was reduced by 99 per cent.

But Singapore faces different challenges, he said. Compared with the urbanised, high-rise environment here, one-to two-storey buildings are prevalent in Guangzhou, which made it easier to control the population.

In the third phase, researchers will look into how many male Wolbachia-Aedes mosquitoes should be released to maintain a low Aedes mosquito population.

The agency will also adjust the number of mosquitoes to be released along the way - to maintain the current mosquito population, or to suppress higher numbers in the expanded area.

They will also develop the production and release of these mosquitoes on a large scale.

Six of these male Wolbachia-Aedes mosquitoes are currently released weekly, for every person in the study area.

The NEA said yesterday that the improved results from phase two are due to the expanded area of study sites and the Wolbachia mosquitoes being released at higher floors, in addition to ground-floor releases.

In the third phase of the project, mosquitoes will be released weekly at 84 blocks in Nee Soon East, and 60 blocks in Tampines West.

With this expansion, the study will involve the largest number of households since it started - with 7,950 in Nee Soon East, and 5,560 households in Tampines West.

Mosquitoes will continue to be released around the HDB blocks, and along common corridors, but not in homes.

A version of this article appeared in the print edition of The Straits Times on January 31, 2019, with the headline 'NEA to ramp up dengue research after success in field tests'. Subscribe
Topics:
More
Whatsapp Linkedin FB Messenger Telegram Reddit WeChat Pinterest Print Purchase Article Copy permalink