The authorities stepped up efforts to contain the Zika virus yesterday even as 15 new cases surfaced.

This brings the total number of people who have been locally infected to 56 - and more are likely to be uncovered, warn the authorities.

National Environment Agency (NEA) officials fogged, misted and sprayed the cluster of Aljunied Crescent and Sims Drive, where the outbreak has taken place.

They inspected over half the 6,000 premises and destroyed 36 mosquito breeding habitats - 22 in homes and 14 in common areas and other spots. NEA has also inspected more than 900 premises at Sembawang Drive, and detected and destroyed one breeding site in a residence in that area.

Meanwhile, the Ministry of Health (MOH) is advising mothers- to-be to avoid areas with "local transmission" of the virus, according to its website. 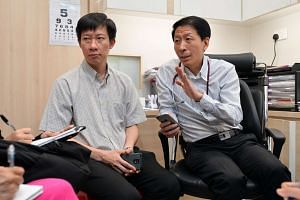 Rise in Zika cases: How doctors at Sims Drive clinic pieced puzzle together

The mosquito-borne viral infection is generally mild, except for its effect on unborn babies. It can cause brain damage in a small number of babies if the mother is infected during pregnancy, especially in the early months.

One mother-to-be is not taking any chances. Yesterday, 28-year- old housewife Sherynn Ellyadi, who is 38 weeks pregnant, moved out of her flat in Block 54, Sims Drive, where she lived with her mother and five children, her mother Lela Noordin, 60, told The Straits Times. Ms Sherynn has moved to her in-laws' home in Woodlands.

In a joint statement with NEA, MOH said it expects more cases to emerge as it continues its probe into people living around Sims Drive and Aljunied Crescent who previously had symptoms of the Zika infection.

"MOH will continue to work with GPs in the area to offer testing for patients who had fever and rash previously," they said.

Two of the latest 15 cases are construction workers at a site at 60, Sims Drive. This means that 39 people there have been infected. The site has been served with a stop- work order until it clears its premises of potential mosquito habitats. By yesterday, all workers there who previously had symptoms were screened, said MOH. It is now screening workers living in other dormitories in the area.

No information was given about the other 13 cases, though the ministry did tell The Straits Times that, so far, no pregnant women here have been infected by Zika.

Saying that NEA has deployed more than 200 officers for outreach and inspection efforts, Dr Amy Khor, Senior Minister of State for the Environment and Water Resources and Health, posted on Facebook: "I hope residents can give their fullest cooperation to the NEA officers to carry out their inspections. This is extremely critical and fundamental to our efforts to reduce the risk of further spread of the Zika virus."

To try to contain the spread, NEA has also started fogging neighbourhoods beyond the Aljunied Crescent and Sims Drive cluster. These include places where those with Zika work or live - Kranji Road, Senoko South Road, Lorong 101 Changi, Toh Guan Road East and Joo Chiat Place.

Residents themselves are taking protective action. Sales of repellents and patches at five Guardian pharmacies in Aljunied soared by 300 per cent compared with last week.

How doctors at neighbourhood clinic sounded the alarm