That was the advice doctors and the Ministry of Health (MOH) had for pregnant women as concerns grew over the spread of the Aedes mosquito-borne virus.

While mild for most, Zika can be dangerous for unborn children. Around 1 per cent to 13 per cent of women infected while pregnant could give birth to babies with small heads - a condition known as microcephaly - and other brain defects.

On social media sites and online forums, some expectant mothers living in the affected area of Aljunied Crescent/Sims Drive wondered if they should move out temporarily.

Others asked if they needed to be tested for Zika regularly after the MOH confirmed 41 locally transmitted cases on Sunday.

One thing in common, however, was the use of mosquito repellents and patches - with many debating the effectiveness of different brands.

Of course I'm concerned. I'm taking precautions but I don't know if it's enough. We can use mosquito patches, but maybe the mosquitoes are already immune to the smell.

MS ALINA AZIZ, a 28-year-old who is eight months pregnant.

Mrs Michelle Tan is currently eight months into her pregnancy. She lives in Shunfu Road in Thomson, outside the affected area.

But the 33-year-old, who works in the banking industry, said: "I'm not too sure what the full facts are. I'm just putting on mosquito patches and using repellent on my arms and legs."

Ms Alina, who works in the healthcare industry, said: "Of course I'm concerned. I'm taking precautions but I don't know if it's enough. We can use mosquito patches, but maybe the mosquitoes are already immune to the smell."

A spokesman for the Guardian chain of pharmacies said that sales of mosquito repellents and patches in its five Aljunied outlets have tripled compared with last week.

Several women's clinics, such as The Women's Specialist in Aljunied Avenue 2, also reported more calls than usual as people sought information on Zika. 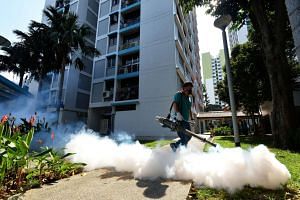 Pregnant mother moves out of area

Consultant obstetrician and gynaecologist Denas Chandra, who works there and has 26 years of experience, advised: "If you have a fever, rashes, headache, red eyes or joint pains, see a gynaecologist."

Associate Professor Arijit Biswas, head of obstetrics and gynaecology at the National University Hospital, said the risk to unborn babies is highest during a pregnancy's first trimester (first three months) and the early part of the second trimester. Some pregnant women said they were not overly concerned, generally because they did not live in the affected areas or had not displayed any symptoms of Zika infection. But they were still not leaving things to chance.

Ms Fhebe Haro Calaycay, 32, an accountant who lives near Guillemard Road, stopped as she left a gynaecology clinic to spray some mosquito repellent on her arms and legs.

"I don't think there are Zika cases in the area I live in but I'm just taking precautions because I'm pregnant," she said.

Ms Nandhini Santhoshkumar, a 26-year-old software engineer who is three months pregnant with her first child, is taking things calmly.

"I know about the Zika situation but I'm not too worried as I've not had the symptoms so far.