Aim is to cover all constituencies by mid-2020, says Ong Ye Kung

These ministerial community visits have also been taking place more regularly - almost one every week - since Mr Ong disclosed plans in July to have multiple ministers on visits to places such as void decks, exercise corners and coffee shops.

In the past, such visits typically involved just one minister each time and took place monthly.

Mr Ong, who is in charge of coordinating ministerial community visits for this term of government, said the visits have become more informal, to allow for more "authentic" interaction and for a more accurate reflection of ground sentiments.

He said: "Gradually and progressively, it has become much more informal and not so staged and planned, and stop after stop, with tentage and programmes arranged specifically for you.

"There's still some of it, but I can see progressively it's becoming a lot more organic, and sometimes residents even have a shock (and ask), 'How come the three of you are here?' " he told reporters.

He was speaking on the sidelines of a visit to a Housing Board MyNiceHome roadshow in Sembawang GRC, where he is an MP.

Ministerial community visits have been conducted for more than 30 years in various formats.

It is part of bigger efforts by the Government to engage Singaporeans, announced in May when Parliament reopened after its mid-term break. 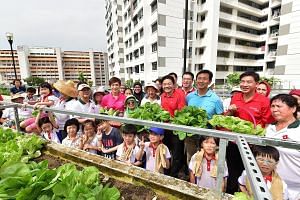 Finance Minister Heng Swee Keat had said then that the Government would be starting a series of discussions to engage different segments of society.

The purpose of the visits is to allow for better understanding between the younger ministers and office-holders and residents outside of their own constituencies, said Mr Ong, adding: "When you have three political office-holders walking the ground, you multiply the interactions by three times."

Before July, there were five ministerial community visits this year. Since then, 13 have been or will be conducted by the year end.

These will typically involve one full Cabinet minister and two other office-holders, such as a minister of state or senior parliamentary secretary from a ministry.

The visits will include opposition constituencies as well, said Mr Ong.

On whether the visits were part of preparations for the next general election, he said the plan to visit all constituencies by one to 1½ years' time "is purely a mathematical formula", going by the rate they are currently making visits.

Prime Minister Lee Hsien Loong had said at the People's Action Party's biennial conference on Nov 11 that the party has only two years left to prepare for the next general election, which is due by April 2021.

Mr Ong said concerns raised by residents in his past few visits ranged from bread-and-butter issues to municipal matters, such as those at his September visit to Sengkang South with Mr Heng and Senior Minister of State for Defence and Foreign Affairs Maliki Osman, where residents said the wet market was too small.

Every piece of feedback "adds up to a certain impression you have - what the entire sentiment is like", he added.

Asked how he would respond to criticism that such visits are just for show, he said: "Scepticism is part and parcel of politics, so it cannot be helped - just live with it.

"Just keep on walking, keep on talking to residents. Keep on letting residents (give) feedback to you, try to act on it, solve their problems. Keep on doing it regardless of the criticisms."