The Ministry of Foreign Affairs said on Friday (Dec 28) that Singapore has not received any official proposal or communications from Malaysia on the construction of a new road link between Singapore and Malaysia.

The statement was issued in response to media queries on comments reportedly made a day earlier by Johor's Menteri Besar Osman Sapian. Datuk Osman was quoted by Malaysia's Chinese-language press as telling reporters after an event in Kota Tinggi that Johor will build a third link between Malaysia and Singapore next year, with Johor siting its end of the link in the south-eastern district of Pengerang.

Mr Osman reportedly also said that Malaysia and Singapore will discuss their recent territorial dispute during the Joint Ministerial Committee (JMC) for Iskandar Malaysia next month, which he will attend together with Economic Affairs Minister Azmin Ali.

An MFA spokesman said: "The Joint Ministerial Committee for Iskandar Malaysia, which is a regular, institutionalised bilateral platform for both sides to review the progress of economic cooperation in Iskandar Malaysia, is scheduled to meet in January 2019.

"The JMC for Iskandar Malaysia does not have the mandate to discuss issues related to the Johor Baru port limits issue.

"Singapore has also not received any official proposal or communications from Malaysia related to the construction of any new road link between Singapore and Malaysia."

The territorial spat unfolded after Kuala Lumpur unilaterally extended the Johor Baru port limits on Oct 25, such that they encroached on Singapore's territorial waters off Tuas. 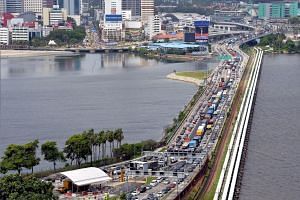 Malaysian government vessels subsequently strayed into Singapore waters, and 14 incursions were recorded between Nov 24 and Dec 5.

As for the third link, Mr Osman was quoted by Malaysian media as saying that he had discussed the project with the Johor Sultan, and the precise location remains to be decided by the Johor government.

Mr Osman's comments on Thursday were only his latest on a possible Malaysia-Singapore third link.

He said in August that the Johor government was in talks with a company to erect a bridge linking Sungai Rengit in Pengerang to Pulau Ubin in Singapore. An undersea tunnel will take motorists from Pulau Ubin to the Singapore mainland, he added then.

"We want to spread development to other parts of Johor," Mr Osman was quoted as saying by The Star Online in August.

Singapore is currently linked to Johor by two land connections: the Causeway in Woodlands and the Second Link bridge in Tuas.