SINGAPORE - For someone who has been in government service for 40 years, and observed the ups and downs of Singapore-Malaysia relations, the events of the past few days seemed eerily familiar to Transport Minister Khaw Boon Wan.

As the disagreements over territorial waters and airspace management flared, seemingly out of nowhere, he had the feeling he had seen it all before.

"I am very saddened by this development... and I couldn't help feeling a sense of deja vu," he said on Thursday (Dec 6), referring to Malaysia's decision to unilaterally expand Johor Baru port limits into Singapore's territorial waters and send its vessels here.

Mr Khaw revealed that since the extension was published in November, there have been 14 incursions by Malaysian government vessels into Singapore's waters. And this happened when the two sides appeared to have turned the corner in their ties.

He said: "When I discussed the High-Speed Rail (HSR) project with (Malaysia's Economic Affairs) Minister Azmin Ali, I had a distinct feeling that the young ministers in Malaysia want a fresh relationship with Singapore, without any past baggage."

"There is so much we can gain working together. I believe the citizens on both sides of the Causeway also expect the younger leadership of both sides to work together for a brighter win-win future."

That is why on the HSR project, Singapore chose not to exercise the full legal extent of the bilateral agreement it had signed with Malaysia, he said.

There were no provisions in the original deal for a deferment of the HSR line between Kuala Lumpur and Singapore. But Malaysian Prime Minister Mahathir Mohamad, grappling with his country's finances, wanted to put the project on hold. 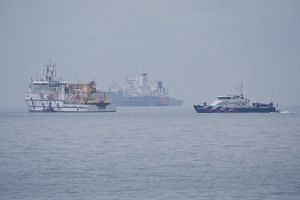 "We sat down, thought through what exactly are their concerns and constraints, and creatively worked out an alternative way to allow Malaysia to defer the High-Speed Rail project and all in the spirit of bilateral cooperation," said Mr Khaw.

Before territorial waters and airspace made the headlines, the issue of water had also cropped up, with Tun Dr Mahathir saying that he wanted to increase the price of raw water supply to Singapore by more than 10 times. This was despite a water agreement between the two countries being in place.

Mr Khaw was asked if these were isolated incidents or whether there was something bigger in play.

"Is there a pattern? I hope not," he said. "But having been in service for so many years I can't help.... That's why I said I have this sense of the feeling of deja vu. But I hope not, because I always take an optimistic approach."

He said he was not in favour of involving any third party at this point to resolve the current dispute.

"I think we should try to resolve it bilaterally, you know, even before you think about bringing in third parties. But the key point is, I think, let's do it professionally, do it with mutual respect, and good sense I'm sure will prevail."

Mr Khaw stressed that Malaysia and Singapore have a lot to gain by working together. They could cooperate on regional and global markets, tourism, manufacturing, logistics and even transport hubs.

"Why must we pursue a destructive path, beggar thy neighbour? What for? When if we work together, there are so many things we can achieve together," he said.

At the same time, he was clear that Singaporeans had to be kept apprised of the latest developments. "While we seek cooperation and friendship with other countries, we must never let other countries take advantage of us," said Mr Khaw.