SINGAPORE - After five years as The Centrepoint's anchor tenant, department store Metro will close its flagship store at the mall next month.

This comes after several other tenants also announced plans to move out, including Times Bookstores and TianPo Jewellery.

Sporting goods giant Decathlon will replace Metro as The Centrepoint's new anchor tenant, and is slated to open in the first half of next year.

Here are five things to know about one of Orchard Road's most well-known shopping centres.

The Centrepoint was built in 1983, and is currently owned by Frasers Centrepoint.

The mall, which has six storeys and two basement levels, opened with British retailer Robinsons as its anchor tenant. It vacated the mall in 2014.

Through the decades, the eight-storey complex was home to many different tenants, including Teochew City Seafood Restaurant, Cold Storage, Marks and Spencer, TianPo Jewellery, and Metro.

2. It housed one of the biggest book stores here

Times Centrepoint was one of Singapore's biggest bookstores, at 8,000 sq ft when it opened in 1983.

It underwent an ambitious revamp in 2002, expanding across three floors and housed a Magnolia Snack Bar. But the bookstore later downsized again. 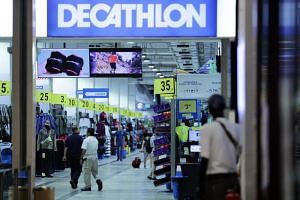 Decathlon to replace Metro as anchor tenant at The Centrepoint

Times Bookstores will close Centrepoint branch in September after 36 years

But Times Bookstores will close its branch at The Centrepoint in September after more than three decades.

The branch's impending closure comes even as many bookstores have closed across Singapore over the years, such as Kinokuniya's Liang Court outlet in April, Popular's Thomson Plaza outlet in June and MPH's two outlets at Raffles City and Parkway Parade in July and September.

3. Home of the 'Centrepoint Kids'

A famous haunt in Singapore's pop culture, the mall was home to the "Centrepoint Kids" in the 1980s.

Known for its location in the heart of Orchard Road, The Centrepoint became a hot spot for teenagers, who would often crowd its corridors dressed in loud and trendy clothes and hairstyles.

The site used to be occupied by The Cold Storage Milk Bar, a popular hangout in the 1960s that offered ice-cream, cake and other refreshments.

The mall also inspired a 2015 local movie called "Centrepoint Kidz" which depicted the lives of Singaporean teenagers from the era.

To this day, netizens continue to share their memories of The Centrepoint online on local discussion platforms, including fond memories of ice cream, movies and even break-dancing at the mall.

The Centrepoint bagged awards for its grand Christmas decorations over the years, including a Guinness World Record for the "Tallest Chocolate Sculpture" in December 2008.

It also set a new Singapore record for "Tallest Christmas Tree made of Cupcakes" on Nov 13, 2009, and in the same year, bagged a silver in the Orchard Road Best Dressed Building competition organised by the Orchard Road Business Association.

The mall underwent two major makeovers. The first was in 1991 and cost $4 million.

The Centrepoint's management committee at the time carried out a survey to find out what customers wanted, and top on the wish list was better toilets.

The toilets were then fitted with automatic flushing systems. Renovation works were carried out at night to minimise disruption to business.

The Straits Times reported that this second major makeover included the widening of its Orchard Road entrance and a new drop-off and pick-up point on level one to make it easier for families with children and the elderly.

Despite the mall's second major revamp, its anchor tenant Metro's decision to leave The Centrepoint may spell more woes for the property as it continues to compete with larger and newer malls in the Somerset precinct.