SINGAPORE - In what is likely the largest swabbing exercise here involving housing blocks, mandatory tests are under way for residents of Block 506 Hougang Avenue 8, as well as staff of shops in seven neighbouring blocks.

Voluntary tests are also being offered to those living in these seven blocks after the Ministry of Health (MOH) linked 13 cases so far to Block 506.

Experts told The Straits Times on Friday (June 4) that such aggressive testing is likely to be part of the "new normal", with the authorities keen to detect and ring-fence cases quickly.

Professor Teo Yik Ying, dean of the National University of Singapore's Saw Swee Hock School of Public Health, said that given the Block 506 cluster, it is possible that the spread has extended beyond the building.

"This is especially since most people are working from home by default now, and they are more likely to be moving about their residential neighbourhoods more than usual," he added.

"The ring-fencing testing is likely to be the norm moving forward, in part because the Delta variant that is circulating in the community now is much more transmissible, and active case finding will help to minimise the extent of any onward transmissions by infected cases."

Testing is one of three strategies, on top of contact tracing and vaccinations, to help the nation battle Covid-19 in the face of new, more contagious variants.

MOH had said on Thursday night that Covid-19 viral fragments were detected in wastewater samples collected from some blocks.

Mandatory testing, it added, seeks to detect cases who were still incubating the virus in the first round of testing, conducted on May 21 and 22, and to prevent spread in the community.

Said Prof Teo: "Wastewater testing will pick up fragments of the Sars-CoV-2 virus if any of the residents in the housing block is infected. So this is a way of performing community surveillance." 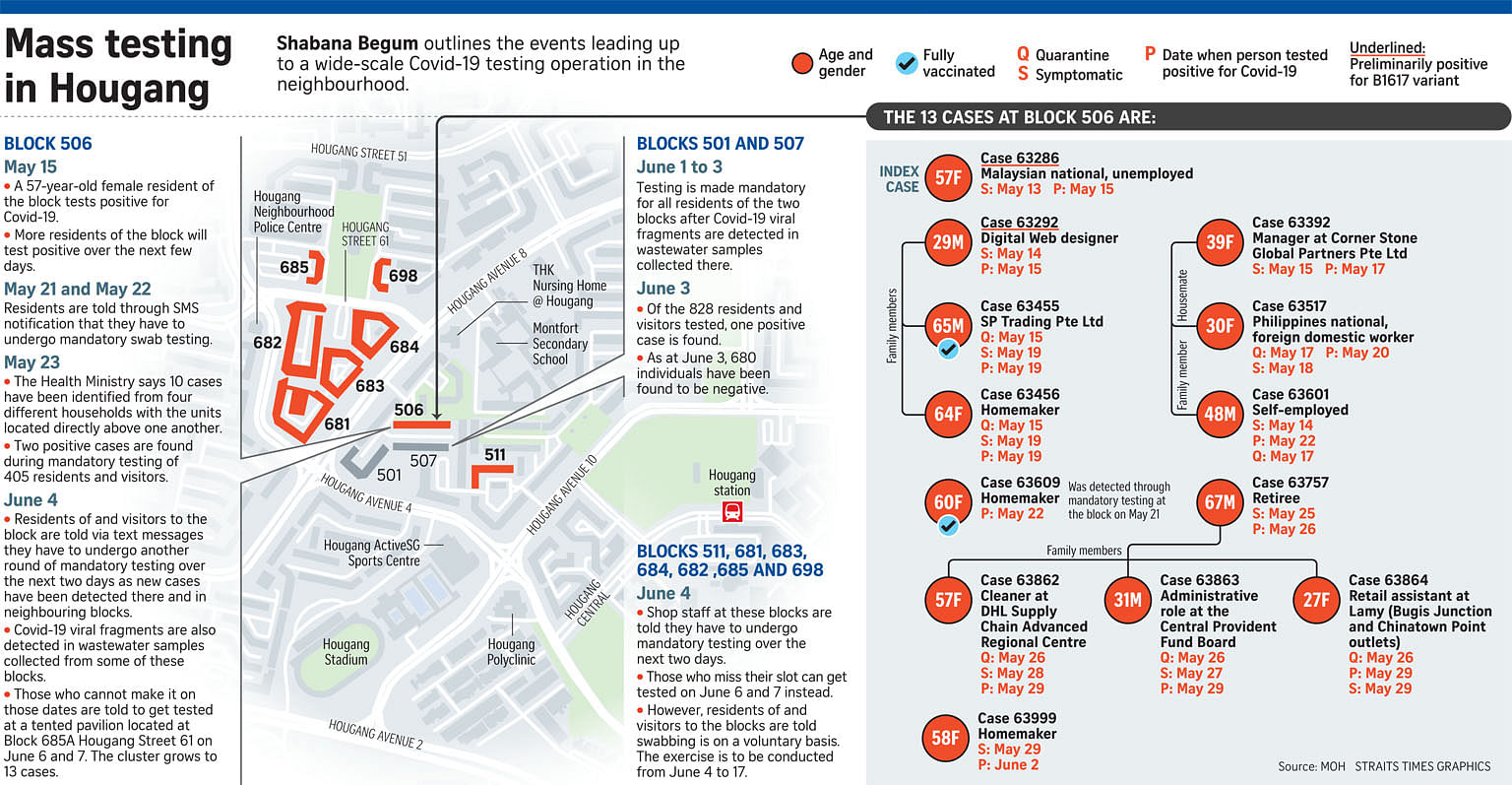 He added that mandatory testing is a form of active case finding.

Experts have noted the more aggressive approach in testing compared with last year.

For example, after a student at Victoria Junior College tested positive for Covid-19, the Education Ministry last month quarantined 95 students and eight staff. About 2,200 students, staff, vendors and visitors had to also undergo swab tests as a precautionary measure.

And on Monday, MINDSville @Napiri home tested 255 residents and staff of the home after a 37-year-old female resident tested positive.

But some residents of Block 506 Hougang Avenue 8 had mixed feelings when they received notifications on Thursday informing them of mandatory testing for the second time in two weeks.

Said a 37-year-old resident who gave his name only as Mr Ang: "The situation looks bad if we're getting tested so often, but I'm also appreciative of the steps that the authorities are taking to stop the virus' spread."

This time, residents of Block 506 were not the only ones in queue. In fact, when the mandatory testing exercise began for them at 9am on Friday, the block's residents were outnumbered by staff of shops in seven surrounding blocks.

The first case in the Block 506 cluster is a 57-year-old Malaysian woman who tested positive on May 15. Other than the 13 cases in the block, MOH had earlier reported that three cases linked to the Changi Airport Terminal 3 cluster were also residents of Block 506.

Meanwhile, a McDonald's outlet in Block 684 was closed on May 27 after a rider who made deliveries from the outlet tested positive.

The outlet has remained closed since, with deep-cleaning carried out and all employees swabbed and told to self-isolate to minimise any transmission risks.

Referring to residents of Block 506, Aljunied GRC MP Gerald Giam said some were wondering if the such testing would become a routine every two weeks.

"The answer is that we don't know for sure," he said.

"The reason why there is another round of swabbing is that new cases were discovered in Block 506. What we do ask is for the residents' understanding... We know it's not easy."