SINGAPORE - The authorities are mulling over whether to bring forward the end-2020 deadline that will ban all personal mobility devices (PMDs) without a safety certification from public paths, following a spate of PMD-related fires in recent months.

In this month alone, there have been at least three such fires reported here, resulting in homes destroyed, injuries and also the death of a 40-year-old Bukit Batok resident.

The issue of fire safety in residential units has also been cast in the spotlight again, even as a national effort to install smoke detectors in all new residential flats picks up pace.

The Straits Times takes a look at what you should do if a fire breaks out at home, and what to keep in mind for different types of fires.

When a fire breaks out

- Do not panic and shout to alert others

- Evacuate and close the door, if possible, to contain the fire

- Turn off the gas mains if you can reach them

- When evacuating the building, use the stairs and do not use the lift 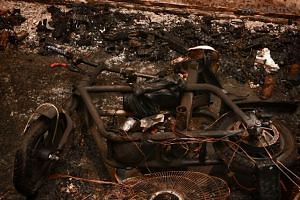 Three hospitals ban charging of PMDs, except in specified areas

Common types of fires in homes

Most of the residential fires in Singapore last year occurred in rubbish chutes or bins, with a total of 1,173 incidents - nearly half of the 3,885 calls about fires.

Such fires can happen when burning embers or lighted cigarette butts are thrown into rubbish chutes or bins.

As rubbish fires are usually small and pose no risk of spreading or threatening human life, the SCDF had said it hopes more members of the public can step up to put out these fires.

This would help free up manpower for the SCDF to focus on major fire and life-threatening emergencies.

If it is safe to do so, members of the public can use water from the tap or water fire extinguishers to put out fires involving combustible materials, such as paper, wood, plastic and fabric.

For rubbish chute fires, they can fill a pail of water and flush it down the chute until there is no more smoke.

Electrical fires can occur when appliances have short-circuited or when sockets are overloaded.

However, fires involving PMDs that were left charging have seen a sharp spike recently, with 74 incidents last year, compared with just 49 the year before.

SCDF urged the public to use electrical plugs that carry the Safety Mark, and also ensure that frayed wires or cracked cords are replaced or repaired immediately.

PMD users should not charge their devices or batteries overnight. They should also regularly examine their batteries for any damage or deformities, such as bloating, corrosion or powdery residue. 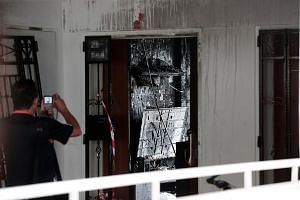 Free installation of smoke detectors in HDB rental flats till 2021

Fires in HDB homes are alarming

Smartphone users should also avoid using damaged or counterfeit charging cables as this could be a fire risk.

Counterfeit charging cables may come at a cheaper price, but they often do not meet the required safety standards. They are also more likely to overheat when being used.

Leaving cooking unattended, even for just a few minutes, could result in a pot or pan overheating and catching fire.

If this happens, it is not advisable to splash water into the burning cookware, especially if it contains flammable liquids such as cooking oil or wine. Doing so would cause the fire to spread further.

To extinguish such fires, turn off the stove or the gas supply immediately, and cover the utensil with a metallic pot lid, fire blanket or wet cloth to smother the air supply. If necessary, wear an oven mitten when doing so.

Open all windows and avoid using your mobile phone on site.

The SCDF recommends that each household has at least one dry chemical powder fire extinguisher, weighing 1.5kg or more, that is approved by certification body Tuv Sud PSB.

Such a fire extinguisher can be used to extinguish many types of household incipient fires.

To operate a fire extinguisher, use the "Pass" method:

- Pull out the safety pin as instructed on the label

- Aim the nozzle at the base of the fire